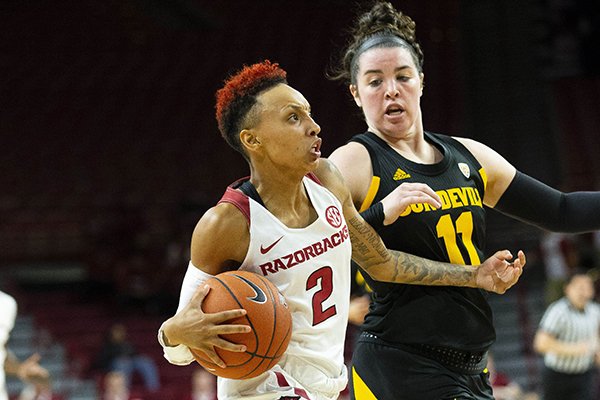 No. 22 Arizona State got some separation midway through the second half and hit 9 of 12 free throws in the final minutes to hold off Arkansas 88-85 on Sunday night in Bud Walton Arena.

Neighbors praised his team's work, after being dominated by the Sun Devils on the road a year ago -- trailing 52-14 at halftime.

"No disappointment," Neighbors said. "Anybody that doesn't believe in moral victories has never been a part of a team in a rebuild situation. They do exist and that was one of them.

"We will obviously tear the film apart. Anytime it's a one possession game, you just look for one thing here, one thing there. Good measuring stick for us. Our progress is very good."

Arizona State (2-1), which never trailed in the second half, pounded the ball inside early in the second half with success. A 10-2 Sun Devils' run got them some breathing room in the third quarter as the lead climbed to 65-55.

Arkansas (2-1) pulled within 79-75 on Jailyn Mason's 3-pointer from the corner with 3 minutes 16 seconds left in the fourth quarter. The Razorbacks had a chance to get closer, but Malica Monk missed two free throws and Arizona State converted on the other end to push the lead back to six.

Alexis Tolefree led all scorers with 22 points, including 12 in the first quarter, for Arkansas, while Chelsea Dungee added 20. Monk added 13 and Maon 11. Kianna Ibis led Sun Devils in double figures with 20 points

"Long trip, long day and we played like it," Turner Thorne said. "We just didn't defend. If anybody knows anything about our program, that's one thing we normally do. We knew they were gonna blood drill us the entire game. Just come down in transition, determined drivers, determined drivers and we just weren't ready. We were a step slow on everything.

Sun Devils junior guard Robbi Ryan finished with 13 points, but came up with a big sequence with Arizona State clinging to a 74-70 advantage with under five minutes left in the fourth quarter. She rebounded a teammate's missed 3-pointer and later in the possession drilled the 3-pointer to push the Sun Devils' lead to seven with 4:35 left.

The Sun Devils had last year's game under control by halftime and led much of the first half on Sunday. But Arkansas charged back in the second quarter and took its first lead on Kiara Williams' rebound bucket with 3:42 left in the half, 38-36.

Williams scored off a nice fast break feed from Tolefree for a 40-38 Arkansas lead, but Arizona State finished the half with an 8-2 spurt for a 46-42 halftime advantage.