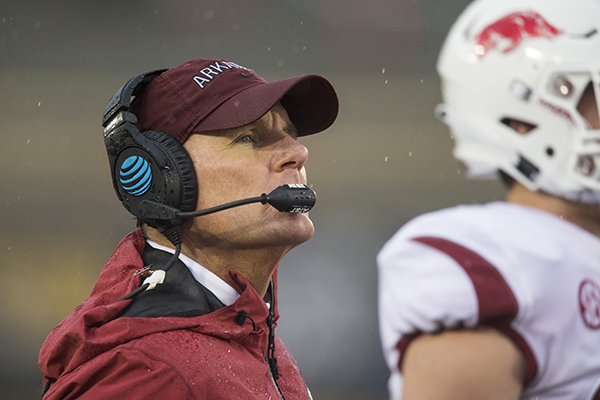 Arkansas coach Chad Morris watches during the first half of a game against Missouri on Friday, Nov. 23, 2018, in Columbia, Mo.

FAYETTEVILLE -- Arkansas Coach Chad Morris gave a quick nod to the Hogs' senior class of 2018 during his postgame remarks on a bleak Friday under a tent with rain dripping overhead in a dark corner of Faurot Field after a 38-0 loss at Missouri.

Then Morris quickly catapulted his thoughts to the immediate tasks ahead: Recruiting, roster building and player development.

"We're recruiting on Sunday, back in here Monday with a [7 a.m.] team meeting, and moving on with the 2019 season," Morris said.

The first-year coach was asked what message he had for the team to begin steering the University of Arkansas back on course after a 2-10 season that featured a program record for losses and a second 0-8 SEC mark in the past six years.

"It's about moving on now. It's about the 2019 season. It's about recruiting. It's about developing the players that we do have, and it starts now. It starts today. We've been recruiting at a very high level this season and that'll continue. We'll be in homes on Sunday night and schools all day on Mondays through the next three solid weeks. That's our focus moving forward."

The Razorbacks are expected to go through a significant roster upheaval during the offseason as Morris and his staff expect to land as many as 29 players between the Dec. 19 early signing day and the traditional February signing period.

Receiver Jarrod Barnes and defensive back Derrick Munson already have announced their plans to transfer, and many more moves are expected.

Morris was asked specifically about quarterback Cole Kelley, a starter early in the season who did not make the last two road trips and took snaps as a scout team tight end last week.

"We'll discuss all that moving forward next week," Morris said.

He also did not speculate on how many players will depart at the end of the fall semester.

"I don't know that," he said. "We'll evaluate all of that in the coming days."

The Razorbacks also could have junior departures. Tight end Cheyenne O'Grady posted the one-word tweet "Declare?" on Saturday evening before later pulling it down.

Junior defenders McTelvin Agim, De'Jon Harris and Ryan Pulley all could declare early for the NFL Draft. They are likely to be among the Razorbacks who apply for the paperwork to determine their draft grades, which does not commit an applicant to coming out early.

Departures could affect every position group on the team.

The Razorbacks have 24 public commitments for the 2019 class, which ranks 16th in the 247Sports composite rankings.

"Our class is strong right now," Morris said of the importance of holding on to the class over the next three weeks. "It's extremely important. It's very vital to our program's success moving forward."

Morris said the way the staff can "sell" recruits after a 2-10 season is to pitch the vision and what's coming.

"That's what we've been selling from the start," Morris said.

The Razorbacks capped the historically low season with another Black Friday loss in dreary conditions to Missouri (8-4, 4-4).

Since Arkansas resumed playing on the day after Thanksgiving in 2011 after a two-year hiatus driven by TV broadcast decisions, the Razorbacks are 1-7. The lone victory in that span came in a 28-3 victory over Missouri on a rainy, cold day in 2015.

The Hogs' last victory over LSU on Black Friday came in the 31-30 game in 2008, dubbed the Miracle on Markham II, in the first year under Bobby Petrino. Arkansas and LSU split two hotly contested Saturday games in 2009 -- a 33-30 LSU victory in overtime -- and 2010, when the Razorbacks won 31-23 in Little Rock to clinch a Sugar Bowl berth.

Then the series resumed its traditional Friday slot, which it held in Arkansas' first season in the SEC in 1992 and again from 1996-2008.

One for the books

In 125 years of football, Arkansas had never had 10 losses in a season until 2018 and its two victories were the second-fewest ever. Additional games have been added to schedules over the years, but this season’s winning percentage is the worst ever:

NOTE Ties registered as a half victory.