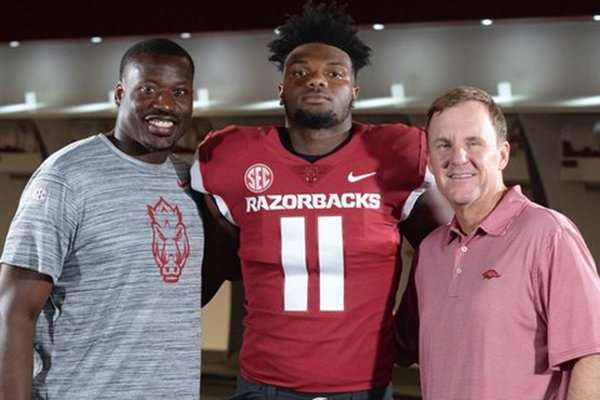 Defensive end Dante Walker has been committed to the University of Arkansas since his official visit for the Alabama game Oct. 6.

A common theme of the 2019 class is the desire to help the program get back to its winning ways. Walker has the same mindset.

"I feel like I can make a difference," he said. "The man that can come in and be the difference from losing and winning."

ESPN rates Walker as a four-star prospect, the No. 43 defensive end and the No. 42 prospect in Georgia. He recorded 69 tackles, 23 tackles for loss, 9 sacks, 8 quarterback hurries, 3 forced fumbles and a recovered fumble as a junior.

"I feel like this year I became a better player technically," he said. "Hand placement, get off with my first step. Things like that."

Being a high-profile prospect committed to an SEC school has brought extra attention to Walker by the way of double teams.

"I didn't get much of it last year," Walker said. "I get the wing and the tackle. So I attack the tackle and shaved the wing right outside the wing."

His lead recruiter, defensive line Coach John Scott, plans to make an in-home visit with Walker and his mother later in the week. He and others in the recruiting class are determined to turn the program around.

"They said they can't wait to have me down there, and they're going to push me and change the program," Walker said.

Arkansas Coach Chad Morris and receivers coach Justin Stepp started off the contact period Sunday with an in-home visit with receiver commitment Shamar Nash in his hometown of Memphis.

Nash, 6-2, 190, played his senior season at IMG Academy in Bradenton, Fla. He transferred from Memphis Central after his junior season.

The NCAA contact period runs until Feb. 2, with a dead period beginning Dec. 17 and ending Jan. 10.

Stepp made an in-home visit with Otey's teammate and receiver commitment Trey Knox, 6-4, 190.