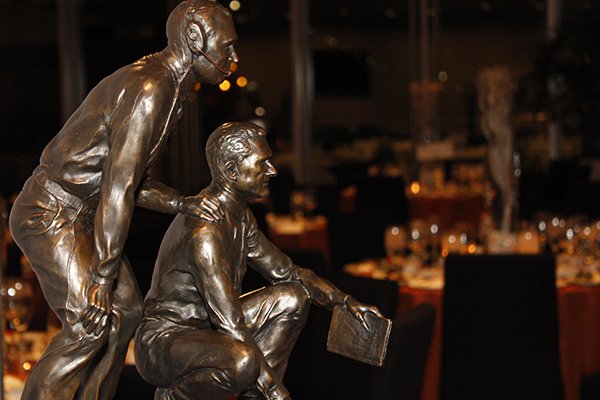 Nine years after Chip Long was a graduate assistant football coach at the University of Arkansas, he'll be back in the state for the Broyles Award banquet.

Long, in his second season as Notre Dame's offensive coordinator, is among five finalists for the Broyles Award.

The winner of the 23rd annual Broyles Award -- named in honor of Frank Broyles, Arkansas' legendary former coach and athletic director, and presented to the nation's top assistant -- will be announced Dec. 4 at the Marriott Hotel in Little Rock.

This is the 22nd consecutive year the SEC has had at least one Broyles Award finalist. The exception was the award's first year in 1996 when Florida State defensive coordinator Mickey Andrews won and the other finalists were Norm Chow (BYU), Steve Dunlap (West Virginia), Greg Mattison (Michigan) and Charlie McBride (Nebraska).

Long, 35, was a graduate assistant for the Razorbacks in 2008 and 2009 while coaching the tight ends when Bobby Petrino was Arkansas' head coach and Paul Petrino was the offensive coordinator.

When Paul Petrino became offensive coordinator at Illinois in 2010, Long followed him to Champaign, Ill., and was the Illini's tight ends coach for two seasons.

Long, who is from Birmingham, Ala., and played tight end at North Alabama, left Illinois to become an assistant at Arizona State -- where he coached tight ends and special teams for four seasons -- and in 2016 was offensive coordinator at the University of Memphis.

When Notre Dame Coach Brian Kelly endured a 4-8 season in 2016 in his seventh year with the Fighting Irish and made changes on his staff, he raised some eyebrows by hiring Long -- who at the time was 33 with one season of experience as a coordinator.

The hiring paid off big time for Kelly and the Irish.

The Irish, ranked 27th nationally in total offense (456.1 yards per game) and 33rd in scoring offense (33.8 points), are considered a lock to be among four teams in the playoffs after winning 24-17 at Southern California on Saturday night.

"If you look at Chip Long's ascension, it's pretty remarkable," said David Bazzel, the former Arkansas linebacker and founder of the Broyles Award. "I've had some people reach out to me and say from a play-calling and creativity standpoint, he's like a Lincoln Riley type."

Riley, who is 23-3 in two seasons as Oklahoma's coach, won the Broyles Award in 2015 when he was the Sooners' offensive coordinator.

The Crimson Tide, who are 12-0 and play Georgia in the SEC Championship Game on Saturday in Atlanta, rank No. 2 nationally in scoring offense (49.0 points) and No. 3 in total offense (538.9 yards).

"I think Mike has done as good a job as any guy in the country could do in terms of the way the players have responded to him, the way he's implemented the system that we have, the way he's used the players that we have on offense," Alabama Coach Nick Saban said in a teleconference Sunday. "The success that we've had is certainly a reflection of the job that he has done."

Saban said Locksley would be a worthy winner of the Broyles Award if he is selected by the panel of former coaches and media members. The final vote will be done after this weekend's games.

"We're really fortunate to have someone of his caliber and quality here on our staff that has the experience he has," Saban said. "He's done a fabulous job for us."

Mississippi State is ranked No. 1 nationally in scoring defense (12.0 points) under Shoop and No. 3 in total defense (268.4 yards).

It's the lowest points per game allowed by the Bulldogs since 1963 when they held opponents to an average of 8.2.

"Coach Moorhead has created an amazing culture here at Mississippi State," Shoop said in a news release. "It is a privilege to work with such a tremendous staff and great players. Anytime you are a coach of the year finalist, it's a direct reflection of the staff and players coming together for a common goal. The players in that locker room bought in to our vision."

"He is as deserving as any coach for the Broyles Award," Moorhead said in a statement.

Bateman, Army's defensive coordinator since 2013, is the first assistant coach from one of the three service academies to be a Broyles Award finalist.

Army held Oklahoma -- which is averaging a nation-leading 50.3 points -- to 21 in regulation in a 28-21 overtime loss. The Black Knights' Triple-Option offense helped by controlling the ball for 44:41.

"I think it's great to have Army represented, and I think Coach Broyles would be very happy about that," Bazzel said. "To make the final five for the Broyles Award is very hard to do. For a service academy coach to do that I think is the ultimate compliment."