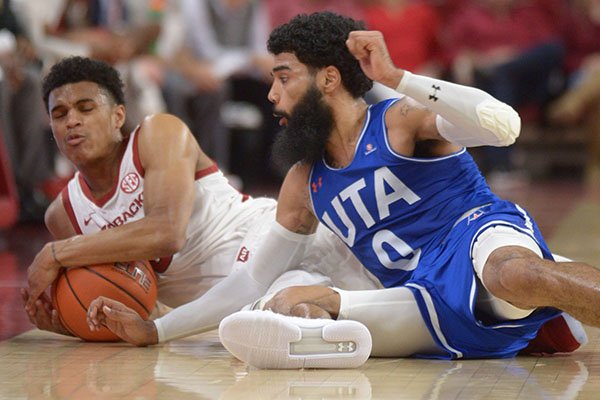 Arkansas guard Jalen Harris (left) and Texas-Arlington guard Brian Warren vie for a loose ball Friday, Nov. 23, 2018, during the first half of play in Bud Walton Arena in Fayetteville.

FAYETTEVILLE -- Given their teams went 49-22 in their two Arkansas years while Jaylen Barford averaged 15.3 points and Daryl Macon averaged 15.1, these 2018-2019 Razorbacks will have games sorely missing their great graduated guards from 2017-2018.

But defensively, these 4-1 young Razorbacks without a senior appear better off with what they've got than what they had.

While certainly scoring plenty, the vintage Nolan Richardson Arkansas teams that Anderson assistant coached were designed more for limiting the opposition to less than Arkansas scored over simply outscoring the opponent. And a significant part of its scoring was generated by its own defense.

That vintage style seems in the works again with a more defensively oriented, more athletic and potentially deeper team.

"Our defense is obviously ahead of our offense," Anderson said during his Monday night Miked Up radio show at Sassy's Barbecue and Grille. "We are getting more and more guys coming in and contributing. That first game we played (the 73-71 overtime loss to Texas) a lot of our guys really got tired. Now we are showing some of that depth that you've got to have, and we can apply the pressure that's a constant."

And getting the deflections that Anderson said is crucial to the defense he seeks.

"There's a lot of pieces to put together, but you can see our guys playing with a little vigor about them," Anderson said. "Going against each other since the summer they are getting the message that defense is going to get you out there on the floor. I think we've got the right guys that are playing the way we want to play."

Joe impresses as a white collar three-point shooter in a blue collar package.

"The other night (Friday's 78-60 victory over Texas-Arlington) I think we had six or seven charges taken. Three were by Gabe (Osabuohien, the sophomore reserve forward) and three by Isaiah Joe. That becomes contagious."

Especially when it's a scoring guard taking the charge.

"To me he's more than just a scorer," Anderson said. "He's a well-rounded basketball player with a good basketball IQ. He makes some nice dishes out there in terms of assists, he's got a good presence on the floor and defensively he's touching a lot of basketballs."

Anybody who met Gerald Skinner laments him recently passing away.

A starting offensive tackle from Malvern for Frank Broyles' 1973-1976 Razorbacks, Gerald was All Southwest Conference on the field clearing paths for fabled running backs Dickey Morton, Ike Forte, Jerry Eckwood and Ben Cowins. Off the field Gerald was a gentle giant never throwing his weight around.