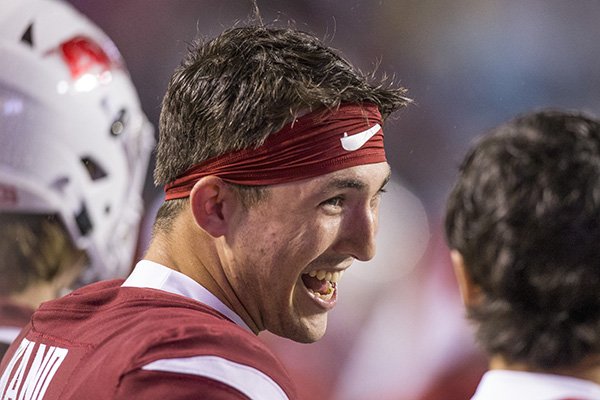 FAYETTEVILLE -- Connor Noland formally met his new baseball teammates at the University of Arkansas on Tuesday night at a team meeting.

Noland has been on campus as a freshman since the summer, but he was a little bit busy playing quarterback for the Razorbacks when the baseball team was going through its annual Red-White fall series.

The 6-2, 207-pounder -- a standout two-sport star at Greenwood -- now is preparing for the trickiest time on his calendar. The baseball team will start practicing early next semester in preparation for the start of the season in February, and the football team will enter spring drills the following month.

Noland signed with the Razorbacks with the understanding he would play both sports. He fielded scholarship offers from many schools, including Texas A&M, Ole Miss, Missouri, Kentucky, North Carolina, Penn State and UCLA, many of whom wanted him as a two-sport player.

"I will talk to Coach Morris, probably within the next few days," Van Horn said Wednesday during the 30-minute introductory news conference for new pitching coach Matt Hobbs. "I know they're on the road recruiting and talking with a lot of their committed kids right now, so I'm trying to leave them alone a little bit."

Noland's projection as a football player and pitcher is a rarity at Arkansas, but competing in dual sports is gaining more popularity nationally. Oklahoma's Kyler Murray pulled off the feat over the past year, and Florida State's Jameis Winston and Notre Dame's Jeff Samardzija did it in recent years.

Current Arkansas tight ends coach Barry Lunney Jr. was a pitcher and quarterback for the Razorbacks in the early and mid-1990s.

Van Horn said he expected Noland to begin a throwing program in the next couple of days along with the rest of his baseball teammates.

"If he wasn't playing football, he wasn't in spring ball, could he be a starter? It might be a little easier without all that. But I think to start off it's going to be a hitter here, an inning there, and let's see how it all develops. But physically, arm strength, mentally, there's a lot to work with there so I think it's just up to him."

Noland led Greenwood to Class 6A state championships in two sports as a senior. As the starting quarterback he guided the Bulldogs to a 52-14 victory over Pine Bluff in the football title game. He was on the mound, firing a two-hitter with 12 strikeouts at Baum Stadium for Greenwood's 4-0 victory over Benton in the baseball championship game.

For Arkansas football this fall, Noland played in four games and led the Hogs to a 23-0 victory over Tulsa in his only start. He completed 21 of 42 passes for 255 yards, with 1 touchdown and 2 interceptions.

Morris said after Friday's 38-0 season-ending loss at Missouri that he would have a chat with Van Horn and Noland to plan out a path to mesh the two sports.

"Absolutely, you bet," Morris said. "He will play baseball. We love guys that want to compete."

Noland also spoke after the game in Columbia, Mo., and said he was looking forward to the baseball season and combining the sports this spring.

"I don't think it will be too tough," he said. "We have great coaches, and I think the staffs are gonna work together ... and figure that out. [I'll] get my time over at baseball and football."

"I think we have to work through the strength and conditioning world and what they need from him on the football field, and what he needs to do on the baseball field, and figure out what the best plan is for him," Hobbs said. "This will be my first go-around with a football player. But I feel pretty confident in my ability to kind of work through these things."