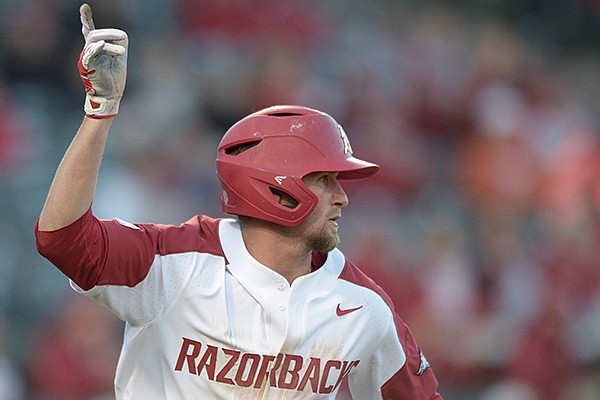 Arkansas infielder Hunter Wilson reacts to hitting an RBI single during the eighth inning of a game against Texas on Wednesday, March 14, 2018, in Fayetteville.

Wilson, a native of Spiro, Okla., will be immediately eligible to play for the Golden Eagles in 2019 via the NCAA's graduate transfer rule. He is expected to earn his degree from the University of Arkansas in December.

At ORU, Wilson will join a team looking to replace three departed starters in the infield from last season when the Golden Eagles finished 38-20 overall, won the Summit League and lost twice in the NCAA Fayetteville Regional.

Wilson played at multiple infield positions during his two seasons at Arkansas. Last season he started 12 times and played in 30 games, mostly at second and first base. He batted .283 with 12 RBI, one-third of which came when he hit a grand slam in the ninth inning of a win over Florida in the SEC Tournament. He had a .941 fielding percentage.

He missed most of the 2017 season with a broken leg.

Wilson and his ORU teammates are scheduled to play at Arkansas on April 9. Wilson started a game at Baum Stadium as a freshman at Stephen F. Austin in 2015.

Arkansas has defeated ORU to open three of the past four NCAA regionals, including a 10-2 win on June 1 in which Wilson recorded a hit and scored two runs as a replacement at designated hitter.

Headed back to my home state of Oklahoma for my last ride as a college athlete! 🤠 🤟🏼🤟🏼🤟🏼🤟🏼🤟🏼 @ORUBaseball pic.twitter.com/aAdfv4uoXS