ESPN goes wide for start of game between Hogs, Tide 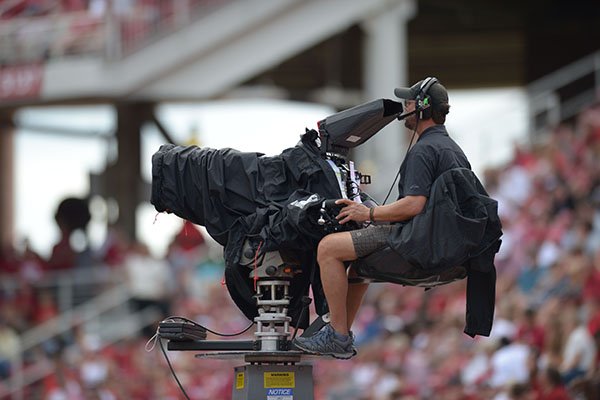 FAYETTEVILLE — Alabama was already ahead 7-0 and driving for its second touchdown before ESPN’s cameras were fully functional Saturday.

A lightning strike near Fayetteville forced ESPN camera operators from their platforms just before the 11 a.m. kickoff. According to ESPN, the lightning strike was within eight miles of the stadium.

The first several minutes of the game, including Alabama’s 76-yard touchdown pass from Tua Tagovailoa to Irv Smith Jr., were shown via wide-angle lenses from high above the stadium.

The Southeastern Conference has similar guidelines regarding lightning, but SEC spokesperson Chuck Dunlap said the lightning strike was not considered within the league’s parameters for halting the game.

“The safety and well-being of our student-athletes and fans will always be the primary focus of any potential weather situation,” Dunlap wrote. “SEC stadiums are equipped with weather radar and trained professionals on site to gauge each potential weather situation. Today prior to the start of the Alabama versus Arkansas contest, weather developed near the edge of the established radius, and it was determined to be moving away from the venue.”

A brief shower fell during the first quarter of Saturday’s game that was won by Alabama, 65-31.