Rebels a different team vs. SEC 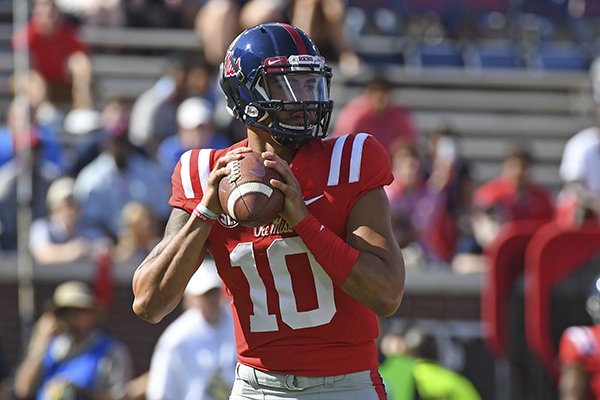 FAYETTEVILLE -- Alabama's 65-31 victory over the University of Arkansas wasn't the high-point game by an SEC team last week.

That distinction went to Ole Miss, which beat Louisiana-Monroe 70-21.

"I was happy with a lot of things, especially offensively," Rebels Coach Matt Luke said. "I felt like we were really efficient in what we did -- a lot of good decisions."

The 70 points weren't the most scored by Ole Miss this season. The Rebels beat Southern Illinois 76-41. They also put up big numbers in victories over Texas Tech 47-27 and Kent State 38-17.

Ole Miss will try to be more productive on offense and get its first SEC victory when the Rebels play Arkansas (1-5, 0-3) on Saturday night in Little Rock.

"You want to go out there and live up to your standard," Luke said. "It's not so much about who you're playing, it's about wanting to play as good as you can possibly play. If we take that approach, we'll be better off."

The Rebels gained a school-record 826 yards against Louisiana-Monroe and led 49-7 at halftime.

"Arkansas will be a change of pace from who we just played," Ole Miss offensive coordinator Phil Longo said. "Watching [the Razorbacks], their front seven is pretty good. I think they're definitely better than their record."

Longo identified Arkansas defensive linemen Armon Watts and McTelvin Agim, and linebackers De'Jon Harris and Dre Greenlaw by their numbers as players who stand out.

Ta'amu rushed six times for 63 yards against Louisiana-Monroe, including quarterback draws that Longo said were part of the game plan because pass drops by the linebackers created running space.

"Where he can hurt you the most is when he's flushed out of the pocket and his eyes stay down the field. You have to keep your eyes on those wide receivers if you're a defensive back."

"They're so talented," Ta'amu said after the three combined for 260 yards against Texas Tech. "They're the best in the nation. I believe that in my heart. I'm grateful they're on my side and I can throw to them."

Ta'amu hit Metcalf for a 75-yard touchdown on the Rebels' first snap against Alabama, but the Rebels didn't score again and gained 173 yards the rest of the game. Ole Miss was held to 328 yards at LSU.

Alabama hit Arkansas for 639 yards to drop the Razorbacks to 83rd nationally in total defense at 400.5 yards per game.

"Ole Miss' receivers are fast, but we are talking about guys 6-4, 230 pounds," Arkansas defensive coordinator John Chavis said when asked to compare the Rebels' wideouts to Alabama's. "They're bigger, stronger so we can hopefully get enough people around them to tackle them. That's what we've got to be able to do."

Longo was asked how Arkansas' athletes on defense compare to Alabama's and LSU's.

Luke said he was impressed with the Razorbacks while watching tape of the Alabama game despite the Tide winning by 34 points. He sounded sincere considering his team lost to Alabama by 55 points.

"I think you see them getting better and better, but definitely a good and capable football team," Luke said. "We will have to play well to win."