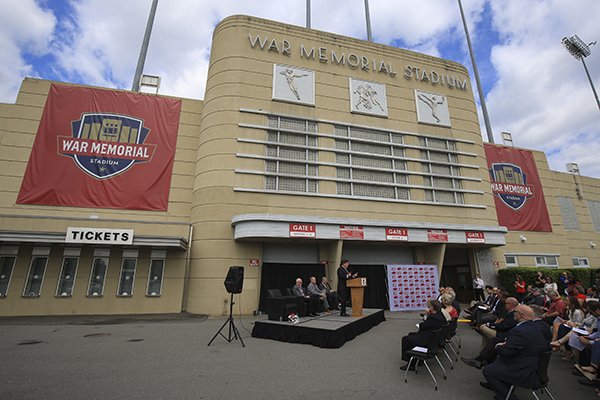 If Saturday's game between Ole Miss and the University of Arkansas was being played in Oxford, it would be sold out and the waiting line for tickets would stretch through The Grove.

The Rebels vs. the Razorbacks is more than a borderline battle. It is a rivalry that dates back to 1908 and has enough history, charm and character that William Faulkner might have written a book about it.

This will be the 65th time the teams have met, and of course there is a dispute on the record. Ole Miss claims Arkansas has a 35-28-1 lead; the Razorbacks claim it is 36-27-1. There was a forfeit by the Rebels many years ago, but they had won on the scoreboard so they claim the victory.

There have been classics like the seven-overtime game and the Henry Heave, both won by the Hogs who have an 8-6-1 lead in games played in War Memorial Stadium.

Let's just get this out there: Real fans support their team regardless of the stadium. These two teams have played in six different cities and were always supported by their fans.

There is no stadium debate anymore. Fayetteville is the home field. Little Rock is the occasional home-away-from-home.

Chad Morris hasn't coached a regular-season game in WMS, and yet he called this a home game and hopes the fans will be there.

The team needs the support of its fans, real fans, not fairweather fans who boo or don't want to spend three hours in a small, historical stadium where only one Miracle on Markham was played -- an outrageous finish by the Razorbacks where a last-second pass from Matt Jones to DeCori Birmingham sent the Hogs to the SEC Championship Game in Atlanta.

LSU was ranked No. 18 and went home with a 21-20 loss while Arkansas prepared to play Georgia.

The rich history of Razorbacks support from the east, south and central parts of Arkansas for games in Little Rock is almost palatable, something former athletic director Jeff Long and former head coach Bret Bielema didn't have a taste for.

It was almost as if Long believed the Razorbacks did nothing before his arrival.

No more arguing. This will be the last time Arkansas plays anyone other than Missouri in War Memorial Stadium, and it is extra sweet that Ole Miss got the honor.

Both teams are searching for their first SEC win. Mississippi has beat up on four nonconference opponents to stand 4-2 on the season, while the Razorbacks frantically have searched for their identity and a team unity that seemed to be discovered Saturday against mighty Alabama.

The Hogs lost, badly, but they scored 31 on the No. 23 defense in the country. More importantly, they never quit fighting.

The Rebels in the Rock give them a chance to earn some more respect.

Tickets are available at WMS or the UA ticket office, and they cost $40 for the end zone and $50 for the sidelines. For the previous SEC game in WMS, tickets were $110 because Long stuck extra fees on them.

There's not all that many tickets left, but there is still a chance to be there Saturday night to show pride for the Razorbacks, the program and the school.

The future of games in WMS will be determined starting next year. If Razorback and football fans buy at least 45,000 tickets for the Missouri game, the history will continue. If they don't, then it is history.

This, though, is the last chance to see the Razorbacks take on the rival Rebels in the grand old lady. Come for the golf course party and stay for the game.