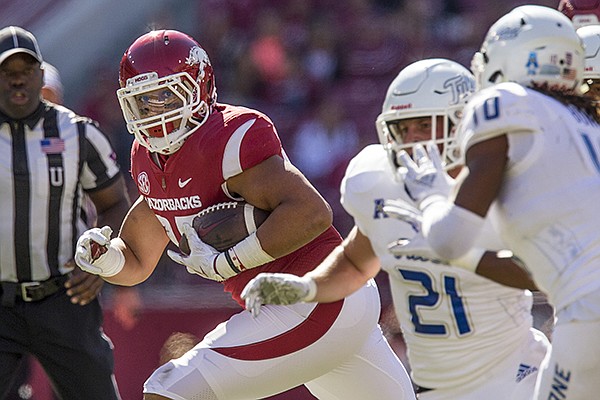 Cheyenne O'Grady, Arkansas tight end, runs after a catch in the 1st quarter vs Tulsa Saturday, Oct. 20, 2018, at Reynolds Razorback Stadium in Fayetteville.

FAYETTEVILLE — Arkansas coach Chad Morris made it no secret that the tight end position would play a key role in the Razorbacks’ offense this fall.

But through the first four games of the season, his proclamation wasn’t ringing true.

Arkansas quarterbacks Ty Storey and Cole Kelley, who alternated starts the first four games of the season, targeted receivers La’Michael Pettway, Jordan Jones and freshman Mike Woods, and for good reason. Pettway and Jones starred in the season-opening win over Eastern Illinois, combining for 225 yards and three scores. Woods also had his moments in the early going, catching four passes for 61 yards in the loss to North Texas.

In the first four games of the season, Razorbacks tight ends were targeted only 16 times. Their targets have more than doubled over the last four games (33). Morris, obviously, has been pleased with the progress of the group as a whole.

“Our tight end production continues to improve,” Morris said on Monday. “It was good to see Grayson Gunter get in the end zone.”

Gunter’s seven-yard touchdown catch from freshman Connor Noland, making his first start at Arkansas against Tulsa, extended the tight end group’s streak of consecutive games with a score to four. Austin Cantrell had a reception for 23 yards in the win, and Cheyenne O’Grady, the leader of the unit, hauled in two passes for 35 yards in the first quarter to set up Arkansas’ first score – a 33-yard Connor Limpert field goal.

“Having those big guys to target definitely gives me a comfortability, too,” Storey added. “Having a big, big target move like our guys can, it’s awesome. They can go up and make plays, too, so I love having those guys out there.

Razorbacks tight ends have totaled 20 catches on 33 targets for 262 yards and four touchdowns in the past four games. The spike in production can largely be attributed to O’Grady’s play since returning from the coaching staff's doghouse.

The Fayetteville native is averaging a team-best 5.25 targets per game in that span and moved to second on the team with 201 receiving yards following the win over Tulsa. His three touchdown grabs are also good for second-best this season.

“It’s been an awesome feeling,” O’Grady said last week. “This is my fourth year here and I haven’t really put my name out there and been able to show what I can do. To be able to start catching balls and all that, showing what I’m capable of, it’s been a great feeling. I’m just glad I’ve been able to help the team as much as I could.”

The group’s impact hasn’t been limited solely to the passing game, though. Redshirt freshman Dalton Wagner, who made his first career start Saturday in place of left tackle Colton Jackson, said the tight ends have taken their roles in run blocking and pass protection seriously and personally.

Prior to Tulsa, the group had allowed four hits on the quarterback and zero sacks in 74 combined pass blocking snaps.

“I can’t explain how awesome it is to have a guy, like, when I’m posted up come and clean the dude over,” Wagner said. “Those dudes have been busting their butts with their blocks. It’s not just like, ‘I’m going out on a route and that’s all I do.’ They’re tied into the run game and in protections and you can tell they’re really a part of the team.

“They’re part of the offensive line, really. Without them a lot of our stuff wouldn’t be able to work.”