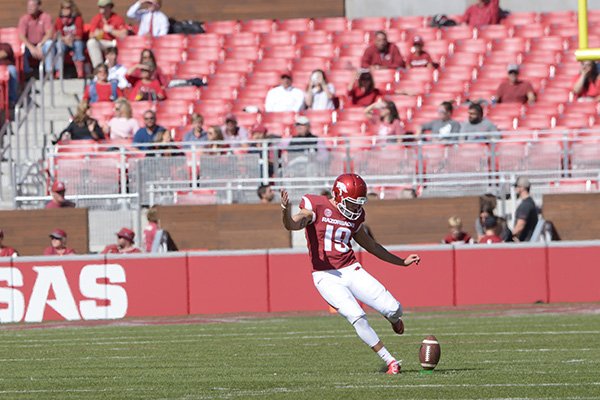 Arkansas kicker Connor Limpert kicks off during a game against Tulsa on Saturday, Oct. 20, 2018, in Fayetteville.

FAYETTEVILLE -- It's another early wake-up call for the Arkansas Razorbacks today.

For the fourth time in five weeks, the University of Arkansas has an 11 a.m., this time against Vanderbilt at Reynolds Razorback Stadium.

"I guess if there's any coaches across the country that have problems with 11 a.m. kicks, they could call us and figure out how we do it," Arkansas Coach Chad Morris said. "Our guys have responded well. We've got a routine that we do."

The Razorbacks usually get up between 6 a.m. and 6:30 a.m. at their team hotel and have their pregame meal at 7.

"The hotel bed is so comfortable that you don't want to get up that early," Razorbacks safety Kamren Curl said with a smile. "But we've got to do it."

Arkansas quarterback Ty Storey said one upside to the early games is not having to wait to play.

"I like to get up and just play," Storey said. "It's fun to get up and not have to wait around all day and watch other teams play."

It's no surprise the Arkansas-Vanderbilt game is an 11 a.m. kickoff on the SEC Network, considering both teams are 0-4 in the conference with the Razorbacks 2-6 overall and the Commodores 3-5.

"It just means that at the end of the day, man, that you're not a premier game," Vanderbilt Coach Derek Mason said. "Not being a premier game doesn't bother me one way or the other, so I'm not going to speak to anything other than the simple fact that if you're playing at 7:30 [p.m.], it's prime time.

"If you're in the morning, it's not a prime-time slot. So with that being said, we have to wake up, kick off, play football and get a win."

Arkansas Athletic Director Hunter Yurachek said he's gotten emails and Twitter messages from fans complaining about the Razorbacks having so many 11 a.m. games -- including three in Fayetteville and one for their neutral site game against Texas A&M in Arlington, Texas.

"Having fans from across the state purchase season tickets, if you have to travel a significant amount of distance, getting here for an 11 a.m. game is a challenge if you weren't planning to arrive on Friday," Yurachek said. "Then obviously a big part of the atmosphere for college football is the tailgating experience, so you lose a little bit of that if you're starting your tailgate at 7 or 8 o'clock in the morning."

Having so many 11 a.m. kickoffs, Yurachek said, also affects recruiting and can be especially difficult for high school athletes who don't live near Fayetteville.

"Most of those young men are playing on a Friday night, and for some of them and their families to get up at 3 or 4 o'clock in the morning and have to make a five-hour drive, that's a significant challenge," Yurachek said. "And all of our sports use a football weekend for recruiting, so the 11 o'clock games impact how we're able to recruit on a specific weekend."

The SEC and its television partners work together to determine game times and assignments, SEC Associate Commissioner Herb Vincent said, but ultimately the networks make the final decision.

CBS gets the first pick of games most weeks for its 2:30 p.m. slot, then games are chosen by ESPN, ESPN2, the SEC Network and ESPNU.

"Due to various circumstances, a school may end up in a particular time slot on multiple occasions during the course of a season," Vincent, a North Little Rock native and Little Rock Catholic graduate, said in an email. "ESPN tries to distribute game times as equitably as possible over the course of the season, but inevitably there are schools that end up playing multiple games at the same time during a particular season."

The Razorbacks at least have a set routine after having so many 11 a.m. kickoffs.

"We try to get up and get the blood flowing and get some music going," Morris said. "It's totally different the way we prepare on a Saturday morning for an 11 a.m. kick than it would be for a 6:30 [p.m.] kick where you're around the hotel all day.

"There are no meetings on game day. You basically get up, have breakfast and get going."

Today will be Vanderbilt's third 11 a.m. game of the season.

"We practice in the mornings, so I don't put a lot of credibility into late or early [kickoffs]," Mason said. "I just think your team has to be ready to play."

Yurachek said there is no formal complaint process, but he has talked to SEC Commissioner Greg Sankey to express Arkansas' concern about having so many early kickoffs.

"It's not ideal right now, but we're in the process of building a program that I think we're going to work ourselves out of being selected for this early time slot on so many occasions."

Yurachek did offer some good news for fans about Arkansas' final home game against LSU on Nov. 10. The kickoff time for that game will be announced Monday.