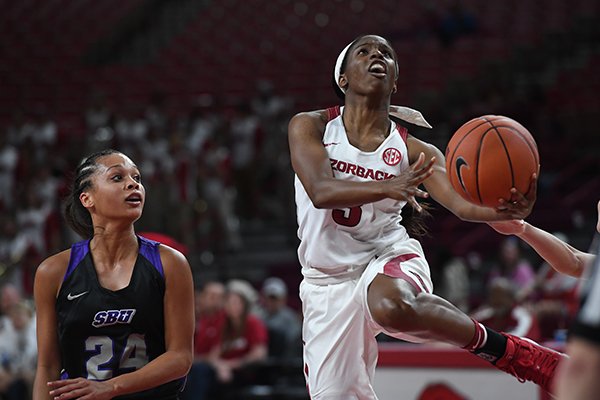 FAYETTEVILLE -- Mike Neighbors said his team is faster than a year ago and the Razorbacks looked the part in Monday's exhibition game in Bud Walton Arena.

The Razorbacks got to the basket almost at will early and overwhelmed Division II Southwest Baptist 115-53.

Arkansas applied a quick knockout punch with an early 18-0 run keyed by lightning-quick sophomore A'Tyanna Gaulden, a transfer from Florida State, who had seven points and three assists in the first quarter. Chelsea Dungee's free throws with 4 minutes, 21 seconds left in the first quarter gave the Razorbacks a 22-2 lead.

Gaulden led all scorers with 27 points on 11 of 18 shooting, but she had plenty of company as five other Razorbacks scored in double figures.

Neighbors could not have been more pleased as his team played fast to score 115 points, but played well defensively and also limited the turnovers.

"I thought it was incredibly fast," Neighbors said. "I don't think we made three for a long time, we got so many half-court layups. I don't know how many points in the paint we got, but it felt like a whole bunch. I thought our pace was outstanding.

"Good night for us to really check a whole lot of boxes. My math is 111 shots combining field goals and free throws and only 10 turnovers. So functionally fast, check. Transition defense was a little spotty at times, but hold a team to 27 percent."

The Razorbacks showed off their outside shooting touch in the second quarter, making six of eight 3-pointers. Alexis Tolefree made three 3-pointers in a row at one points and finished with 11 points in the first half.

Neighbors liked what he saw from those playing their first game as a Razorback. Gaulden and Dungee both redshirted last year after transferring, while Tolefree was a junior college transfer and Doumbia, a true freshman.

"I.T. (Gaulden) has waited a year to play and that's a roller-coaster year if nobody's ever had to go through it," Neighbors said. "It's so hard to show up and practice when you know there's no game. I thought Alexis Tolefree looked very natural. I didn't think Rokia looked like a newcomer and then the returners did their thing."

• Dungee's elbow jumper with 52 seconds left in the first quarter gave Arkansas a 29-11 lead and was the Razorbacks' first field goal outside the paint.

• Arkansas hit the 100-point mark on Tolefree's layup with seven minutes left in the fourth quarter, giving the Razorbacks a 100-51 lead.