Razorback soccer back in SEC semifinals 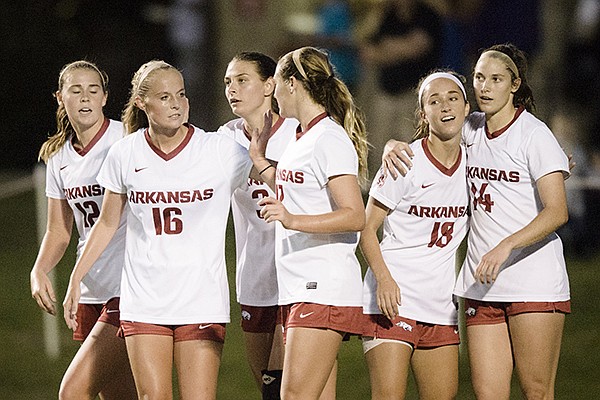 Arkansas Razorbacks players embrace after a score during a soccer game, Thursday, September 27, 2018 at Razorback Field in Fayetteville.

Arkansas' soccer team is back in the Southeastern Conference semifinals for the third consecutive season.

The Razorbacks jumped on 5-seed Ole Miss early Tuesday night with three goals in the opening seven minutes of the match and cruised to a 4-0 win. Arkansas was the highest-seeded team to advance on Day 2.

Razorbacks junior Tori Cannata and sophomore Taylor Malham each scored as part of Arkansas' three-goal first half. Cannata netted a header in the second minute of the match and Malham scored five minutes later. Arkansas was also the beneficiary of an Ole Miss own goal between Cannata and Malham's goals.

Senior Reece Christopherson set the final score early in the second half in her first match since Oct. 4. The Razorbacks' four goals is the program's highest-scoring match in SEC Tournament play since beating Missouri 4-0 in 2013.

Arkansas will face 8-seed Florida on Thursday at 3:30 p.m. on SEC Network in hopes of making its third consecutive SEC Tournament finals appearance.

UPDATE: Due to the threat of inclement weather in the Orange Beach, Ala., area on Thursday, Arkansas and Florida will play at 12 p.m. on Friday. The match will air on SEC Network.