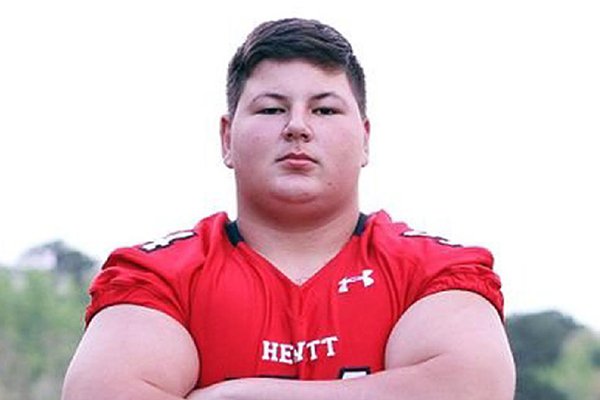 "I thought it was awesome," Stone said. "The fans there are crazy ... calling the Hogs. It's crazy. When you get that many people in a stadium calling the Hogs at the same time, it's absolutely incredible."

He was impressed by the 433 total yards and 353 passing yards the Hogs produced.

"I liked seeing the way we were running the offense," Stone said. "Our passing game was really strong [Saturday]. Running game wasn't as good as it could've been, but Coach [Chad] Morris said they were running on that and overall they looked really good."

He weighed as much as 365 pounds earlier this year, but he has worked on slimming down.

"I love to eat, but coach came to me and he was like, 'Hey, we're going to need you to lose a couple of pounds,' " Stone said. "I was like, all right, I might as well lose it because I know they're going to want me to lose it at Arkansas. So I just put my mind to it and just started eating a little bit better. Soon I started losing weight, and ever since it's been easier."

The Stone diet consists of putting less on his plate and eliminating certain foods.

"Basically food portions, just not eating as much," Stone said. "I tried to cut out the sugar and breads. And a lot of running."

Stone, who plans to return to Fayetteville for the Alabama game Oct. 6, graded out at 86 precent, had 4 pancake blocks and did not allow a sack in a season-opening 48-15 victory over Pascagoula, Miss., on Aug. 24.

"When I dropped the weight, I felt like I could move a little bit faster when I pull, and also when we run, I'm able to block a little bit better since I lost weight."

"They told me I was looking good, looking leaner," Stone said. "They said they were proud of me."