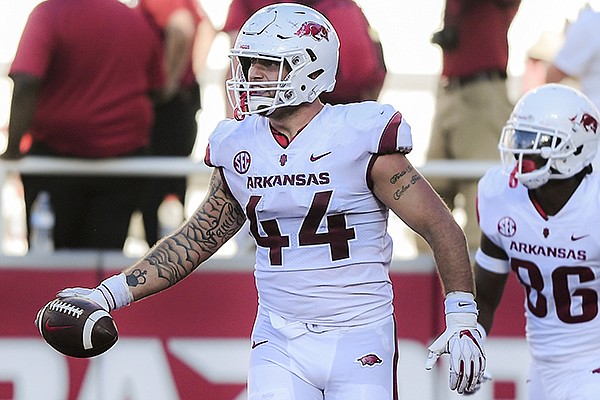 Austin Cantrell is thought of more as a block-first tight end compared to others in his position group, but Saturday he showcased his speed as he rumbled 42 yards for a touchdown in the fourth quarter.

It was the third score of Cantrell's career and his first since 2016.

Asked about his surprising footspeed on Chad Morris' radio show and his first scoring grab of the season, which set the final score, Cantrell said he ran track at Roland High School in Oklahoma.

"I actually anchored a relay team in high school," he added. "We won state, too, so it was fun."

Defensive lineman Michael Taylor, who joined Cantrell on the show, said he had a successful high school track career of his own and initially attended North Carolina Central to run track before opting to pursue football.

Taylor also spoke about the day he decided to give football another shot. He and his father eventually decided going the junior college route would be the best situation for him at the time.

"I was in my dorm in North Carolina and football was going on and I couldn't play," he said. "I was watching games on TV, and I was like, 'Why did I give that up? I love the game too much.'"

When asked about Cantrell and Taylor's track history, Morris said he and his staff prefer a prospect who plays multiple sports as opposed to those who focus on only one.

"I'm cut out of the old school way. Kids need to compete," Morris said. "There's a point in time to specialize, but you want guys to play multiple sports."

Colton Jackson back at practice

Two weeks ago during his first radio show at the Catfish Hole in Fayetteville, Morris said the Razorbacks were about three weeks away from getting offensive lineman Colton Jackson back.

Two weeks later, on his birthday, Jackson was back participating in practice. Jackson was still limited, however, and wearing a green no-contact jersey. The junior left tackle underwent back surgery in July and was expected to miss at least six games.

"Colton Jackson got in pads this week and hit the sled and gave a lot of excitement to that offensive line when he got back out there," Morris said. "Maybe we can get him back next week, which will provide the depth that we need."

Morris said there is going to be more of a rotation along the offensive line this week than in the season opener.

"You're going to see guys like Ty Clary, and he's going to get some playing time at that left guard. Austin Capps is going to get in," he said. "You'll see him and Noah Gatlin this week as well."