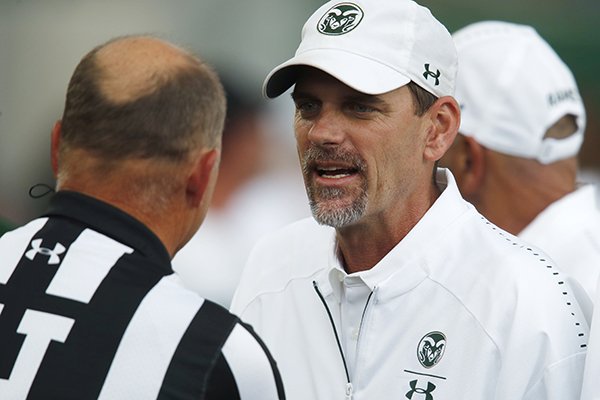 Bobo was a quarterback at Georgia, then a graduate assistant and assistant coach for the Bulldogs the last 21 times his team went against Chavis at Tennessee and LSU.

"I've known coach Chavis for a long time," Bobo said. "Obviously, I knew about him when I was a player and his reputation. Then facing him as a coach, and having a chance to get to know him, he's just a great guy. Very personable. Going against him, it's always a challenge."

"The thing with Coach Chavis' defenses are they're sound, but they play extremely hard and extremely tough. There's an element of toughness when you play a John Chavis defense."

"He's a great competitor, a great football coach," Chavis said. "And I know for a fact a great man."

Arkansas true freshman Bumper Pool was expected to be a quick contributor, but the second quarter of the opener turned out to be the arrival time for the 6-2, 223-pound linebacker from Lucas, Texas.

Dre Greenlaw exited with an ankle injury -- which leaves his status unclear for Saturday's game at Colorado State -- and Pool came in, racking up six tackles, a pass breakup and a 60-yard fumble return that set up a touchdown.

"It was huge and this fall has been a huge thing for me being in Dre's back pocket," Pool said. "I have questions for every little thing that he does and having Chief on my tail 24-7 making sure I'm doing everything right is huge."

Pool said getting playing time in the opener was like a dream come true.

"I would say it was one of my biggest dreams to play for Arkansas and getting out there and being the first game was just amazing," he said. "I didn't expect it. But I was excited and prepared to be in there whenever I could."

Senior guard Johnny Gibson said the Razorbacks' emphasis on lowering body-fat content and improving conditioning paid off with a solid start at running the new up-tempo offense, even though Arkansas only got off 67 snaps against Eastern Illinois.

"One of the drives where -- on our scoring drive with Devwah [Whaley's 1-yard touchdown run] we ran like real quick," Gibson said. "We ran a lot of plays, like six plays real fast.

Coach Mike Bobo said his beleaguered Colorado State defense, which allows 606.5 yards per game and ranks 118th in total defense, has to be quicker to take action against Arkansas Coach Chad Morris' offense than it was in losses to Hawaii and Colorado.

"Just knowing Coach Morris and knowing what his whole philosophy offensively is, it's to play fast to put pressure on the defense," Bobo said. "And we struggled with that last week. So, we will get fast.

"And then at the same time, they'll be times where they want to try to get the right play, and that's when you look to the sideline and do those things. But the No. 1 thing we're going to have to do is adjust to playing fast and getting lined up and pulling the trigger defensively, so to speak, faster."

In CSU's most recent game against an SEC team, Alabama beat the Rams 41-23 last season.

The folks in charge of the music selections at practice had a running theme this week by including songs with mountains and the west in them as the Razorbacks prepared to head to Fort Collins, Colo.

Among them, the 1967 Motown hit "Ain't No Mountain High Enough" with Marvin Gaye and Tammi Terrell was a highlight Tuesday, while John Denver's "Rocky Mountain High" and "Thank God I'm a Country Boy" were prominent Wednesday.

Freshman receiver Mike Woods is expected to play his first game Saturday after being suspended against Eastern Illinois.

"I just want to see him take advantage of this opportunity," senior receiver Jared Cornelius said. "Being a freshman, you kind of get overwhelmed. Sometimes you go out for warm-ups and you're tired before the game has even started."

Cornelius said he wants Woods to ease his way into the game and have fun.

"You can see sometimes his head is kind of ticking and ticking, he's thinking about things," Cornelius said. "But football's a game at the end of the day. You just have to have fun."

The two longest-running traditions at Colorado State involve the firing of a cannon and a prominent letter "A."

Members of the military have been firing the 75mm cannon "Comatose" after Colorado State scores since 1920, making it the longest-running tradition associated with the Rams' football program. The cannon, refurbished in Denver this summer, stands in the southeast corner of Canvas Stadium, the 2-year-old on-campus facility.

A prominent white "A," which stands for "Aggies," on the Rocky Mountain foothills near campus will celebrate its 95th anniversary this year. Built on land leased to the school for $1 by R.G. Maxwell in 1923, the "A" is 450 feet high and 210 feet across at the bottom. Early each fall, freshman football players join with on-campus organizations to give the "A" a fresh coat of paint.

The school's official mascot "Cam the Ram" gets its name from Colorado Agricultural & Mechanical College, the institution's former name.

The Razorbacks will be the eighth opponent to face Colorado State at Canvas Stadium, which celebrated its grand opening Aug. 26, 2017, a 58-27 Rams' victory over Oregon State.

Fort Collins, Colo., founded as a military fort in 1864 and the home of Colorado State University, is about an hour north of the state capital of Denver on Interstate 25. Fort Collins has a population estimated at 160,000, roughly twice the size of Fayetteville, with its estimated population of 83,826 in 2016.

• The CBS Sports Network crew assigned to the game is Carter Blackburn on play by play, Aaron Taylor as analyst and John Schriffen as the sideline reporter. Blackburn and Taylor were on the call for the "Henry Heave" game at Ole Miss, in which Arkansas beat the Rebels 53-52 in overtime in 2015.