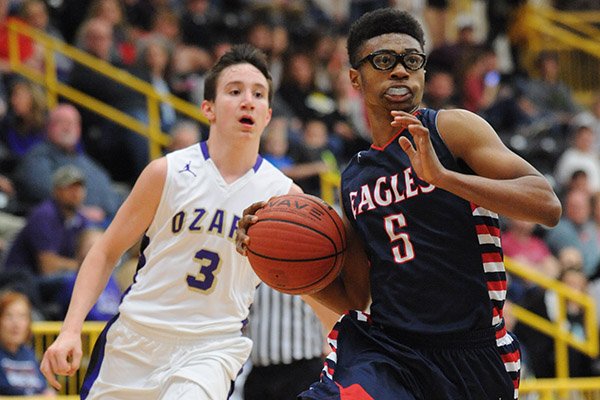 Isaac McBride (5) of Baptist Prep drives to the lane ahead of Brendon Lawson of Ozark Saturday, Feb. 26, 2016, during the second half of play in the championship game of the 4A North Regional Tournament in Tiger Arena in Prairie Grove.

“It went really well,” McBride said. “They just came to practice and watched us worked out and they came to the house.”

Anderson and Watkins hit on several topics, including what the Razorbacks have to offer and the upcoming season. McBride said he will decide fairly soon whether or not he’ll take an official visit to Fayetteville.

“It will probably be pretty soon because we have some visits coming up, but I’ll talk to my parents more and then will make a decision,” he said.

McBride will make his first official visit to TCU this weekend, followed by trips to Auburn on Sept. 21-23 and Kansas on Sept. 28-30. He said his parents enjoyed the in-home with Anderson and Watkins.

“They always like to hear from coaches and the stories they tell and what they have to offer from a program aspect academically,” he said.

McBride averaged 24.5 points, 4 rebounds, 2.5 assists and 1.6 steals for Baptist Prep as a junior while shooting 44.9 percent from beyond the 3-point line and 80 percent on free throws.

He said Anderson sees him as a combo guard should he become a Hog.

“They just told me I could play the 1 or the 2 and I’m not just limited to play the 1 spot or the 2 spot,” he said. “I can play multiple positions and I am able to defend and score.”

He hosted TCU coach Jamie Dixon on Sunday, is expecting Kansas coach Bill Self on Tuesday and Auburn coach Bruce Pearl on Sept. 17. He’s unsure which other two schools will get official visits.

“Really don’t know to be honest with you because there’s been a lot of new schools contacting, but I feel like we’re going to wind down and find those schools we can take the visits,” McBride said.