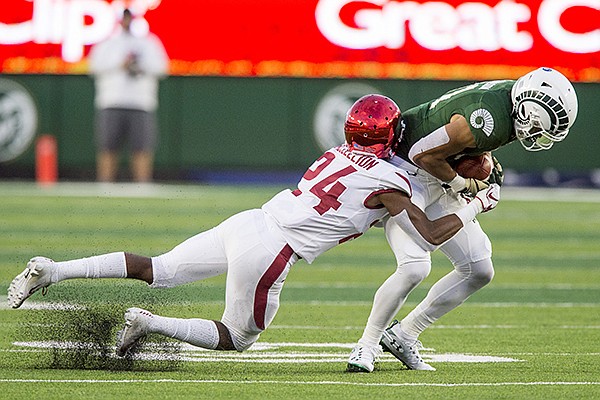 FAYETTEVILLE — Less than two days after his defense allowed nearly 400 passing yards to Colorado State quarterback K.J. Carta-Samuels, Arkansas defensive coordinator John Chavis is searching for answers and preparing for his next challenge.

North Texas, the Razorbacks’ final non-conference opponent prior to the start of SEC play, is in the midst of its best opening to a season in more than two decades. The Mean Green are 2-0 for the first time since 1994 and look stellar offensively through two games against SMU, Chad Morris’ former club, and Incarnate Word.

To open his press conference Monday, Chavis spouted off the key numbers that stand out to him and praised North Texas quarterback Mason Fine, who moved up to No. 3 in career completions and No. 4 in career touchdowns in school history in Saturday’s win.

“Through two ballgames they've got 1,136 total yards and 66 first downs, 915 yards passing, so we're going to see another very fine quarterback,” Chavis said. “He's earned his stripes and does a tremendous job, gets the ball out quick. (North Texas is a) very well-coached football team and very disciplined.”

The Mean Green’s aerial attack leads all FBS programs in total output, averaging 457.5 yards per game, and Fine is a major reason why. He has thrown for 862 yards and seven scores against one interception while completing better than 72 percent of his passes. Fine also has dynamic receivers at his side, which is a concern for Chavis and Arkansas’ secondary.

North Texas’ pass-happy offense features two skill players averaging more than 100 receiving yards per game in Rico Bussey and Jalen Guyton, a former four-star receiver out of Allen High School in Texas who originally committed to Notre Dame. Both Bussey and Guyton have three touchdowns this season and figure to test an Arkansas secondary that has not fared well against opponents’ top targets the first two weeks.

And Colorado State’s Preston Williams, a Tennessee transfer, hauled in 12 passes for 154 yards and a pair of scores. His final two receptions of the game capped a four-catch, 79-yard fourth quarter that set up the Rams’ game-winning touchdown with eight seconds remaining.

In order to limit such outings, continuing to build depth at the corner position is a high priority, Arkansas coach Chad Morris said. Hollins beat Chevin Calloway twice on big plays in Week 1 and, aside from Ryan Pulley’s early interception on Saturday, the Razorbacks’ secondary posed little in the way of resistance against Colorado State.

“It’s some technique issues, and we’ll continue to correct the techniques.”

The technique corrections are a must as Arkansas sits well outside the top 100 nationally – No. 117 of 128 – defending the pass, trailing the likes of Old Dominion, Tulane and SMU. The Razorbacks are allowing 333.5 yards per game through the air, a less-than-ideal number in any circumstance but especially so considering their competition.

“It gets right back down to technique that, as coaches, we’ve got to do a better job of teaching the fundamentals of technique,” Chavis said. “Make no misunderstanding about it: there’s not one player on this squad that can go out there and not try to (play) to the best of his ability.