Mean and extreme: Hogs face an even stronger pass attack 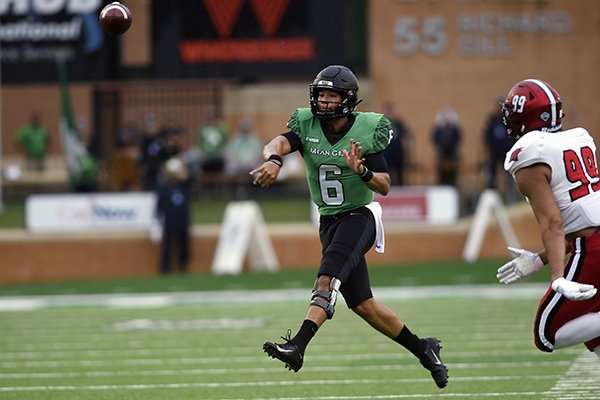 FAYETTEVILLE -- From Colorado State's 359 passing yards per game to North Texas' 457 per game, the aerial challenges just keep coming for the Arkansas Razorbacks.

The Mean Green enter Reynolds Razorback Stadium on Saturday lead the nation in passing offense and are also first with 92.5 offensive snaps per game.

For an Arkansas defense that buckled under the weight of 25 snaps in the fourth quarter of a 34-27 loss at Colorado State last week, the Mean Green present another dangerous challenge.

In their third season under Coach Seth Littrell, the Mean Green have hit their offensive stride with 5-11 junior quarterback Mason Fine leading the nation with 431 passing yards per game and an efficiency rating of 176.1 that ranks 21st. Fine's array of receiving targets includes Jalen Guyton, a former Notre Dame signee and Biletnikoff Award candidate who has 206 receiving yards this season.

"Coach Leach has done a tremendous, tremendous job in college football in terms of what they do with the fast pace and using the personnel they've got," Chavis said. "There's no doubt you see it there. Every offensive coordinator is going to put his spin on his game plan and what he thinks they need to do."

North Texas spreads the field, Fine surveys and deciphers at the line and often pulls the trigger within a few seconds of taking the snap.

"He really knows what he's doing in that system," Razorbacks linebacker De'Jon Harris added. "He knows the pre-snap reads and where he wants to go with the ball."

Chavis said there are parallels between the Mean Green scheme and what the Hogs have already faced against Eastern Illinois and Colorado State.

"They run some of the same stuff that we've been seeing, but obviously their quarterback makes their offense go," Chavis said. "He does a tremendous job. Not real big, but he can spin the ball as well as anybody we're going to play."

Fine played at Locust Grove High School in eastern Oklahoma, 65 miles from Fayetteville, but the two-time Gatorade Player of the Year received just one Division I scholarship offer -- from North Texas.

"He's extremely smart and extremely competitive," Littrell said. "He plays with a chip on his shoulder. ... He's been playing since he was a true freshman."

Fine became the first quarterback at North Texas to throw for 400 yards in back-to-back games in victories over SMU and Incarnate Word to open the season.

The Mean Green's system, a no-huddle, Spread attack with four receivers in the game most often and operating at an accelerated pass when it wants, is a product of the times.

"It's pretty much the game of football nowadays," Ramirez said. "You know, everybody's going to the Spread or the RPO [run-pass option], trying to air the ball out. North Texas is no different."

Arkansas defensive end McTelvin Agim said he thinks getting pressure on Fine is the key to minimizing the damage from the powerful North Texas attack.

"I feel like it's very critical," Agim said. "We didn't get too much pressure last week and you saw the outcome. We definitely got to get a lot more pressure this week because we're playing the No. 1 [passing] offense in the country and the No. 1 quarterback in the country."

The Razorbacks played with three key defenders out last week -- linebacker Dre Greenlaw and defensive ends Randy Ramsey and Dorian Gerald -- and might get limited use from Ramsey this week.

"We anticipate him playing," Arkansas Coach Chad Morris said. "How many snaps does that mean Saturday? I don't know. But we anticipate him being back and able to make an impact up front."

The Razorbacks have struggled at containing top receiving threats through two games. Eastern Illinois speedster Alexander Hollins caught 9 passes for 127 yards and 3 touchdowns in the opener. Last week, 6-4 Preston Williams had 12 grabs for 154 yards and 2 touchdowns.

Guyton, at 6-1, 202 pounds, is just one of many weapons at Fine's disposal. Rico Bussey has a team-high 17 catches for 237 yards and 3 touchdowns. Jaelon Darden has 8 catches for 91 yards, and tight end Kelvin Smith has 7 receptions for 79 yards.

North Texas hasn't unleashed its running game yet, averaging 110.5 yards per game and 2.6 yards per carry. However, DeAndre Torrey has three rushing touchdowns and Anthony Wyche averages 4.4 yards per carry.

The Razorbacks would like to limit the Mean Green run game, as they did to Colorado State last week, and make Fine and the pass game earn every yard it gets.

Fine's assets, which include solid escapability and running skills, make the Mean Green a formidable opponent.

"He's plenty capable of playing, and he's surrounded by a big offensive line," Chavis said. "They keep some of the pressure off him, but their scheme keeps some pressure off because of pre-snap reads. It's going to be read, some of it, but they've still got a good drop-back game."

Littrell said Fine's work off the field sets him apart.

"He's gotten bigger, stronger and faster, and he spends a lot of time in the film room," Littrell said. "He's like another coach on the field. He's put in a lot of work with the receivers in the offseason to get rhythm and timing down. He's a special player."