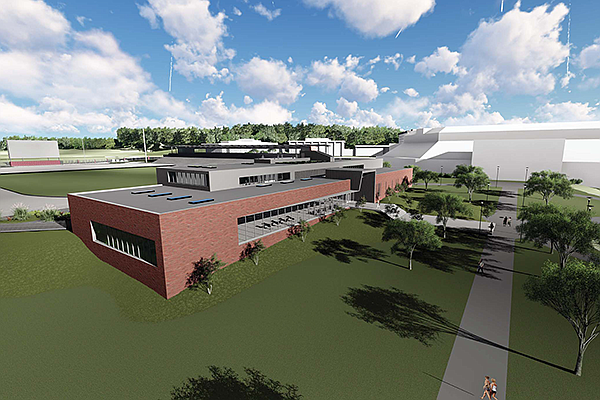 An artist's rendering shows a proposed track operations building on the University of Arkansas campus in Fayetteville. The white outline in the background is the west side of Bud Walton Arena.

FAYETTEVILLE — It didn’t take long for Arkansas athletics director Hunter Yurachek to turn his eye toward the next phase of Razorback renovations.

“With the completion of the Donald W. Reynolds Razorback Stadium Renovation and North End Zone Addition, we are now in position to explore some important facility upgrades for our baseball and men’s and women’s track and field programs,” Yurachek wrote in an email. “The new additions would greatly enhance the areas used every day by our student-athletes in those sports as they compete for SEC and NCAA Championships.”

Yurachek detailed the baseball construction earlier this year during the Razorbacks’ time at the College World Series in Omaha, Neb. A 40,000-square-foot, $20 million to $25 million building will house coaches’ offices, a new team clubhouse, weight-lifting areas and other team areas that have fallen behind in the back-of-house areas of Baum Stadium.

The other renovations will benefit athletes in cross country and indoor and outdoor track & field. A 25,000-square-foot, $8 million to $10 million track operations center would be constructed on the south side of John McDonnell Field, near Bud Walton Arena, and would address several of the items addressed by the proposed baseball facility.

“It could take our facility to a new standard and that would be super exciting,” Harter said. “The outdoor is long, long overdue. We need a new locker room complex, especially on the women’s side. We have 70 athletes and we have 45 lockers.

“We just kind of outgrew it. Between the men and the women, we have 120 athletes. It’s the largest team on campus.”

The track operations center would include new coaches’ offices, which currently are located inside areas initially intended to serve as suites at the outdoor field.

“We have great competition facilities, but some updating needs to be done to the locker rooms, team rooms, weight rooms and those types of things,” Arkansas men’s track coach Chris Bucknam said. “We’re looking forward to getting down to the details.” 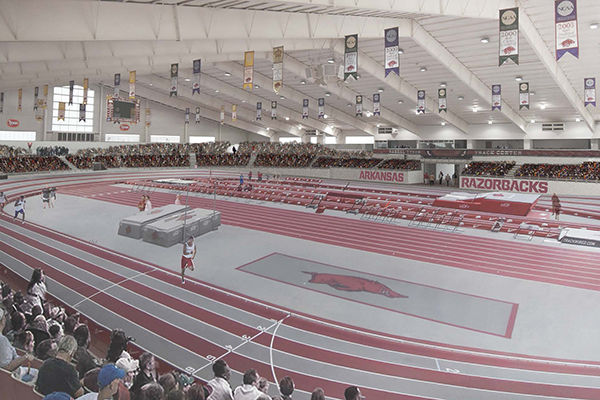 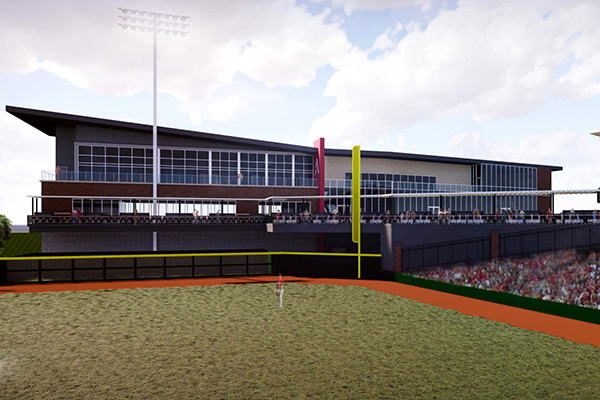 The renovations to the Tyson Center for indoor track are the most complicated of the three proposals that will be taken in front of the UA Board of Trustees in November. The proposed renovation will cost between $10 million and $20 million and would entirely reconfigure the layout of the facility that opened in 2000.

As part of the proposal, the east wall of the facility would be knocked down and rebuilt to expand the size of the building. Seats, which currently sit in a square configuration around the oval track, would be reinstalled to wrap around the track, and a new concourse would be built toward the top of the facility so that spectators would walk down to their seats instead of up bleachers.

The renovation also would include new club-seating areas, and additional bathrooms and concession stands for fans, and a new press box on the south side. For athletes, on-site locker rooms would be built underneath the elevated seating, eliminating the need for athletes to be in uniform when they arrive to the facility.

“With the exception of resurfacing the oval and the straightaway … and then leaving the track up permanently instead of taking it down (for the offseason), not much has been done in the facility,” Bucknam said. “Our vision is to not have square seating and create better sight lines. We believe we have one of the fastest tracks in the world … but we would like to improve the fan experience.”

The Tyson Center typically hosts multiple college and professional events each year, in addition to high school state championships. It is also scheduled to host the SEC Indoor Championships in February 2019 and the NCAA Indoor Championships in March 2021. Hosting more significant meets — SEC athletics directors recently strengthened rules on which indoor facilities could host conference meets, which could benefit the frequency with which Arkansas hosts — is at the heart of the proposed renovations.

A 2011 facilities master plan called for the razing of Barnhill Arena, to be replaced with a new, smaller multi-use facility that would be home to the Razorbacks’ gymnastics and volleyball teams. Barnhill Arena was built in 1956 and took on its current configuration after a series of renovations in the late 1970s. The basketball programs abandoned the building when Bud Walton Arena was built a quarter-century ago.

Former Arkansas athletics director Jeff Long said in September 2016 that Barnhill’s upkeep was becoming expensive because of its age.

“The question becomes: Can you build something smaller, more appropriate, more flexible, more what you need today, that in the long run will be less expensive than maintaining Barnhill Arena?” Long said. “Each year, we look at Barnhill Arena and the expenses continue to grow.”