Contracts extended for Van Horn, 5 other UA coaches through 2023 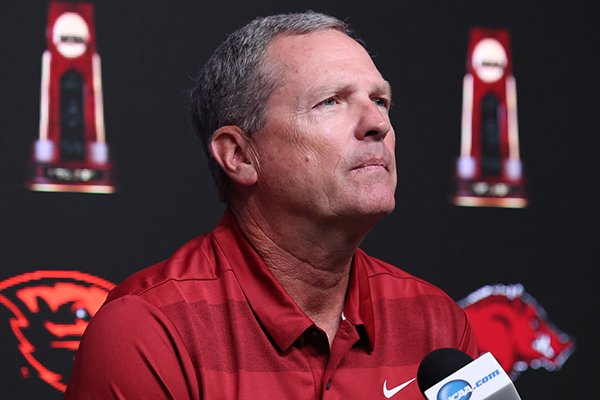 Arkansas coach Dave Van Horn listens to a question during a news conference Sunday, June 24, 2018, at the College World Series in Omaha, Neb.

FAYETTEVILLE — The contract for Arkansas baseball coach Dave Van Horn has been extended two years through the 2023 season, according to documents obtained Wednesday through an open records request.

Van Horn will be paid $925,000 in public and private funds by the university - $650,000 in base compensation and $275,000 for speaking and media responsibilities, and can earn private compensation through camps held at UA facilities.

Van Horn also has a $175,000 annual sponsorship deal with Easton bats, according to his contract.

Van Horn is eligible to receive up to two $50,000 pay raises and can earn up to two one-year contract extensions if the Razorbacks make the NCAA Tournament, which they have done 15 times in Van Horn's 16 seasons.

Van Horn won his 600th game with the Razorbacks early last season and has a 643-364 record at Arkansas.

Previously Van Horn was being paid $525,000 in base and media fees, plus the compensation from the Easton contract, which runs through 2020.

The Razorbacks are coming off a national runner-up finish in 2018 when they lost to Oregon State in the finals of the College World Series. Baseball assistant coaches Wes Johnson and Nate Thompson also received pay raises during the off-season, increasing their pay to $230,400 and $168,300, respectively.

All three coaches had postseason teams in 2018.

Bucknam and Harter can earn up to two one-year extensions and up to two $25,000 pay raises if two of the three teams they coach earn top-10 national finishes during the same academic year. Neither coach would have been able to obtain the postseason incentives in the 2017-18 academic year.