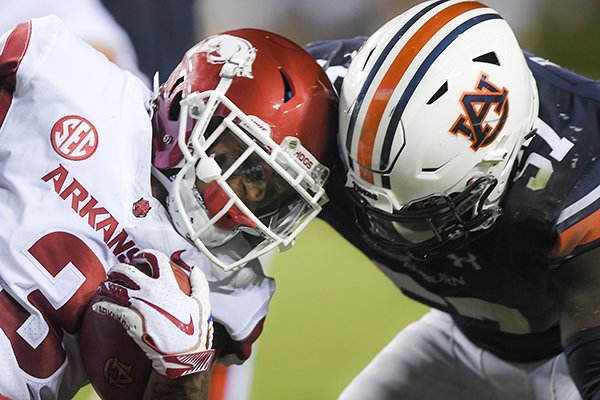 FAYETTEVILLE - No self-respecting football coach ever claims a moral victory.

Chad Morris certainly did not. But given the Arkansas Razorbacks' performances the previous two Saturdays, losing 34-27 and 44-17 in nonconference games they were favored against Colorado State in Fort Collins, Colo. and North Texas at Reynolds Razorback Stadium in Fayetteville, fans and media know a moral victory when they see one.

Morris came as close to describing one as a coach dares. Given the gumption the first-year coach's Hogs showed battling nationally No. 9 Auburn in a 34-3 loss last Saturday night at Auburn, Ala. he was right to be proud.

Despite the lopsided final score, Arkansas' defense played valiantly on a short field handicapped by disasters on special teams. Offensively, Morris learned he has a quarterback, junior Ty Storey, that will keep the Hogs competing as hard through the fourth quarter as the first one. Arkansas actually outgained Auburn, 290-225 in total offense.

"Obviously no one is excited about the outcome," Morris said. "Losing is not acceptable. But the effort these young men keep giving is something we can build on. These guys fought their tails off."

But to win a fight, their special teams require special improvement.

A STAR IS BORN

Admittedly it's just one race, but those attending Saturday's women's collegiate 5K cross country event at the Chile Pepper Festival in Fayetteville may have witnessed Coach Lance Harter's latest Arkansas production of "A Star is Born."

From the gun, Robinson burst to the front and stayed there. She led the Razorbacks to a 34-116 victory over runner-up Wichita State, clocking 16:15, 13 seconds ahead of outstanding runner-up junior teammate Carina Viljoen.

"To put things in perspective, Carina missed All-America last year by a second and half and she's in much better shape this year," Harter said. "And you can see where the little one (Robinson) is. We have two low cards for the national championships and we could have more."

Cleary died last week of cancer. A star rising above his environment as Dermott High School had no track when Dermott native Cleary represented it, Fred nevertheless ran so well to be recruited by McDonnell's Razorbacks.

He responded as an All-Southwest Conference hurdler and sprinter on 1982-85 teams that won every SWC Indoor and Outdoor meet. Fred was a three-time All-American on relays including two in 1985, the second-place Indoor 4x400 and sixth-place Outdoor 4x100. Those relays helped Arkansas complete McDonnell's first NCAA Cross Country-Indoor-Outdoor national championships triple crown.