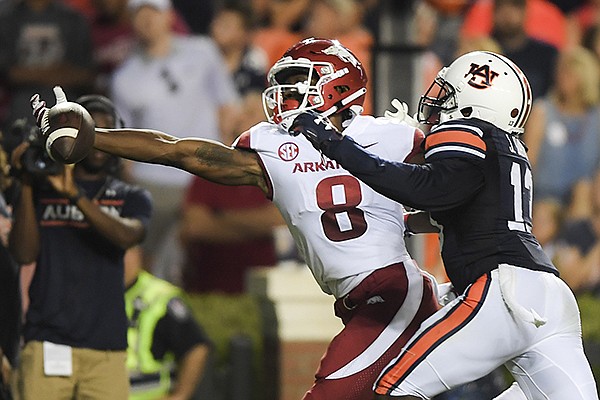 FAYETTEVILLE — The consensus was that Arkansas, on both sides of the ball, showed signs of life and improvement following its 34-3 loss at Auburn on Saturday.

The Razorbacks’ defense played its best all-around game, defensive coordinator John Chavis said, in holding the then-No. 9 Tigers to 225 yards of total offense. And quarterback Ty Storey earned starter status for the foreseeable future with a “gritty” effort in which he completed 13 of 31 passes for 141 yards and an interception.

Developments in those phases of the game may have taken place, but Arkansas’ offense again struggled in some familiar areas, particularly in the passing game on third down. Storey completed just 3 of 12 third down throws in the loss for 51 yards. His one interception came on a third down deep ball in the final seconds of the first half.

Moving the chains through the air on crucial downs has proven to be a major issue through four weeks. The Razorbacks have connected on just 13 of 40 (32.5 percent, last in SEC) third down throws this season and are 3 of 16 in such instances when needing 4-9 yards.

Arkansas offensive coordinator Joe Craddock said the offense has to manage ways to stay out of third-and-long situations, which could boil down to playcalling on first and second downs. Only Missouri (46) has attempted more passes on third down this season.

“Third-and-seven plus kind of get us in a bind,” he said. “We converted one the other night, but we've got to stay out of those negative and no-yardage plays (early in drives). Getting behind the chains, that makes it really difficult.”

Admittedly, the Razorbacks’ offensive line contributed to the passing woes, failing to allow Storey enough time to survey the field and deliver accurate balls in key moments. Sensing an obvious passing down with Arkansas needing an average of 8.5 yards on third down also allows opposing defenses to bring house pressure.

And far too often Storey was knocked to the turf. He was hurried, officially, nine times and sacked twice, and right tackle Brian Wallace was often times the weak link in pass protection against Auburn’s quick ends.

After he was unable to complete his first third down throw of the night to La’Michael Pettway, who did not record a catch for the first time this season, Storey connected on his next two for first down yardage, hitting Jared Cornelius for four yards and Deon Stewart for 32 to the Auburn 20. He then failed to complete a third down throw over the final three quarters, bringing drive after drive to an end.

Craddock pointed to another third down play in which Stewart ran himself open on a dig route, but Storey was unable to find him due to a protection breakdown.

“When you are in third-and-long, you've got to get to the chains to make a first down and they're bringing a lot of pressure and (we have to) get the ball out of the quarterback's hands and get down to the chains,” Craddock said. “A lot has to do with it. I think a lot of (things are) involved, but we've got to stay ahead of the chains and quit getting so far behind them.”

For the Razorbacks’ offense to truly take steps in the right direction, it has to improve on first and second downs and, at all costs, avoid third-and-long scenarios, wherein Arkansas quarterbacks have proven to be almost wholly ineffective.