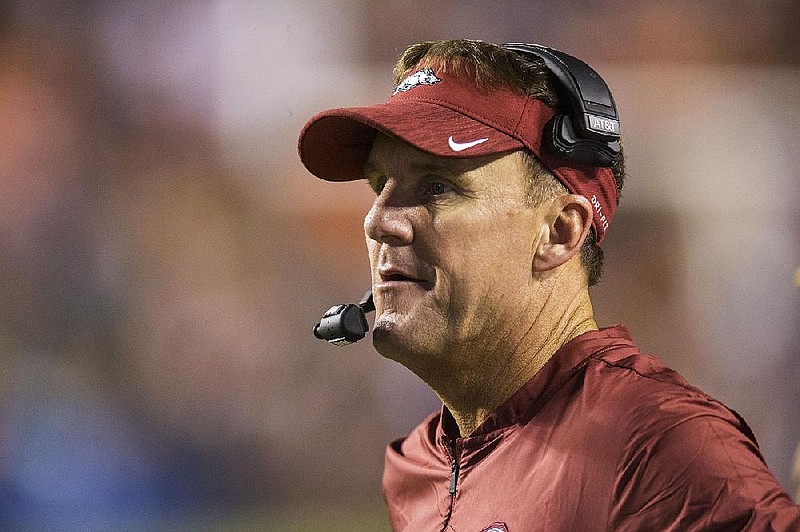 FAYETTEVILLE — There are no moral victories.

Chad Morris keeps mentioning that disclaimer as the week progresses. The Arkansas coach did just that again Wednesday night while finding some positives in a 34-3 loss to Auburn.

Morris was asked about improvement in several areas on his weekly radio show at The Catfish Hole. Yes, there were places where the Hogs stepped forward, especially as far as stopping the run.

“First, make no mistake about it, there are no moral victories,” Morris said. “No one will accept losing.

“But, we had some fight, we continued to compete and we battled a great team.”

Morris mentioned that it was the third straight week the defense held an opponent under 100 yards rushing.

“We have a lot to work on in all phases,” he said. “But we had improvement. Ty (Storey) showed toughness. By evidence of his jersey (mostly green) after the game, he was hit too often.”

Morris said Wednesday was a solid day of practice, proof that the Hogs are “just focused on the process of improving.”

Asked if there was anything that has surprised since his arrival as Arkansas coach, Morris said, “Not really because I knew there was great passion here. But I guess what I've seen is that it's not just in the state, but it's incredible all over the country. They want it so badly and what I will tell them is that (winning) is coming a whole lot sooner than we can imagine.”

Morris said players were emotional that they didn't win last week at Auburn.

“The way they are approaching it is at the right level. Winning will take care of itself as long as they continue to work the process.”

Storey was asked about the positives in the game.

“It felt good,” he said. “We didn't score enough points, but our mentality was good. We were loose. We knew what we were going to see from their defense. There were just a couple of things we didn't do that kept us from putting points up.

“This week we are going to see a really talented front seven from A&M. They have a ton of looks on third down and that's what we are focusing on right now. I am comfortable with our plan.”