O'Grady reemerges as threat in loss to Aggies 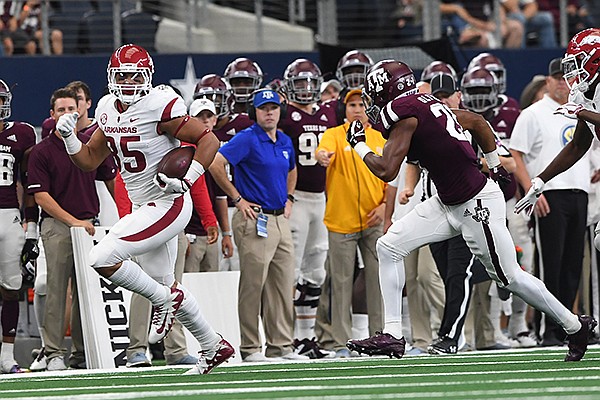 Arkansas tight end Cheyenne O'Grady runs with the ball during a game against Texas A&M on Saturday, Sept. 29, 2018, in Arlington, Texas.

ARLINGTON, Texas — Not too long ago, Arkansas senior linebacker Dre Greenlaw had to take to Twitter to get the attention of junior tight end Cheyenne O'Grady, his teammate since high school.

"We need you on the team bro!!" Greenlaw's since-deleted tweet read. "Just asking you to come to workouts and class for your brothers. That's all man."

That was Sept. 4, just one day after Arkansas coach Chad Morris said O'Grady missed the season-opening win against Eastern Illinois because of a suspension. Fast forward three-plus weeks, O'Grady, the former four-star recruit out of Fayetteville High School, might just be the most reliable tight end on the Razorbacks' roster.

After not seeing the ball thrown his direction through four weeks of the season, according to CFBFilmRoom.com, O'Grady was far and away Arkansas' most effective weapon in the passing game in a 24-17 loss to Texas A&M on Saturday. He finished with a team- and career-high 77 receiving yards – nearly double his previous career-best of 40 yards against Virginia Tech in the 2016 Belk Bowl – on three catches.

"He’s definitely turned the corner in the last couple of weeks. He's made a huge improvement," Greenlaw said. "I thank him for that, for coming on and being part of the team, getting himself right and having a big game like he did today. I talked to him afterward. He was sitting there crying, but I told him, ‘We need you.'

"I think he understands that. Hopefully we won’t have more problems out of him."

Jeremy Patton, rated the nation's No. 1 junior college tight end in 2017, leads the team with three dropped passes through five weeks. Facing third down on its first possession of the game, Patton dropped a ball that would have given Arkansas first-down yardage before leaving the game with a lower leg injury.

Austin Cantrell, Arkansas' starting tight end for the fifth consecutive week, also dropped a simple pass from quarterback Ty Storey on the first play of the second half. No other offensive player had more than one drop leading into Saturday's game, and Arkansas' tight ends have combined for four.

With the offense in desperate need of playmakers on offense, O'Grady should get more looks at a position that hadn't been all that productive prior to Saturday. Storey is all for it, he said.

"He's a great player. We've just got to keep giving him the ball," Storey said of O'Grady. "I think everything is starting to settle down for him and I think he's going to be a huge part of this offense. Just to get in there and be able to compete against those guys and show what he can do, it settles anyone down a little bit and kind of gets them in the rhythm of a season."

O'Grady did more than reel in Storey's passes with ease. He picked up extra yardage with his feet and sparked the Razorbacks offense on its touchdown-scoring drives in the second and fourth quarters. His first reception, a 36-yard pitch and catch, moved Arkansas to the Texas A&M 39. Three plays later, his 17-yard grab set the Razorbacks up inside the Aggies 10.

With under five minutes to play in the fourth, he stepped up again, bringing down a 24-yard pass from Storey to the Aggies 29. Storey hit freshman Mike Woods for a score on the next play.

Running back Rakeem Boyd, who earned his first start against his former team, said he would like to see O'Grady more involved in the passing game moving forward.

"I thought he did good," said Boyd, Arkansas' leading receiver two consecutive weeks. "They put him in the game and he did what he was supposed to do."