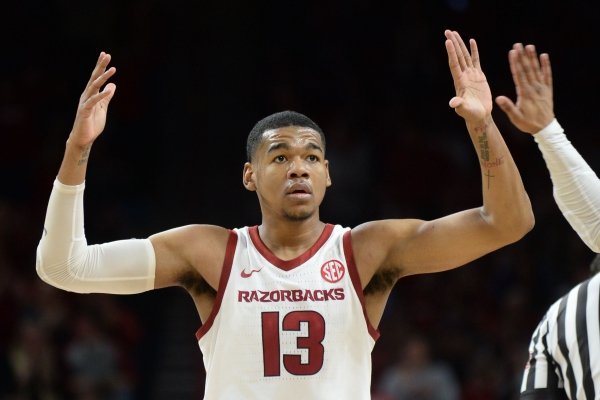 Arkansas' Mason Jones gestures during a game against LSU on Saturday, Jan. 12, 2019, in Fayetteville.

The fifth in a nine-part series reviewing Arkansas basketball in 2018-19.

• Crafty. There were points throughout the season when I would think to myself, "Where would this Arkansas team be without Mason Jones?" It's a thought that I honestly didn't expect to have entering the year, but it was pretty cut and dry, especially early on, that Jones deserved to be in the lineup and given starter's minutes. To put it simply, Jones is solid-to-good at just about everything on the court, which makes him invaluable to a basketball team. If you have 4-5 guys just like him, you're better off for it. This tweet really sums up Jones' game and the way he carries himself well.

On the offensive end late in the shot clock, Jones was almost always creative and would often summon his ability to make something out of nothing. He would attack the lane regularly and create contact to force a whistle and get to the line, hit a tough shot (see at LSU) or find a teammate. Jones is a score-first guard in most peoples' eyes, but he played very selfless, too. He held a top-20 assist rate in SEC games. In conference play, Jones also drew 5.1 fouls per 40 minutes, which was good for second on the team behind Daniel Gafford. It was also second among all guards in the league behind Vanderbilt's Saben Lee, and eighth-best overall.

Jones was a player this season who would have a great scoring night and perhaps lead the team in scoring, then when scanning the box score would have six rebounds and four assists with no turnovers, too. He did a little bit of everything, and was key in a number of Arkansas' wins in 2018-19.

• Deadly from deep at times. At the conclusion of Arkansas' preseason schedule which included the Red-White scrimmage and exhibitions against Tusculum and Southwest Baptist, I asked Mike Anderson how big it would be for the Razorbacks if Jones found his touch from 3-point range heading into the season opener against Texas. Jones shot 4-of-16 from deep in the aforementioned games. Isaiah Joe was already establishing himself as a knockdown shooter - little did we know what kind of season he would have at the time - and having a perimeter complement to him, I thought, would be vital. Jones was the easy answer there.

Arkansas was a much better 3-point shooting team with Jones in the lineup - 35.6 percent when on the floor, 31.5 percent when he sat.

• Rebounding a plus. Jones, in his own words, used to be a big guy - as in weighing upwards of 250 pounds in his prep days. That size, along with being 6-5, helped him carve out space and grab offensive and defensive rebounds. The days of perhaps being a bit too heavy have passed, and Jones is able to use his tremendous feel for the game and his craftiness along with a more-able body to be a plus on the glass in most instances. Jones finished second on the team in total rebounds and tied with Isaiah Joe for second-most rebounds in conference play.

• Great personality. Jones was consistently the most fun and honest player interview this season. I found him to be very insightful - win or lose - and introspective regarding his own struggles.

• Good in crunch time. Jones shot better than 50 percent from the floor in the final five minutes of regulation and overtime this season, making him the ideal candidate to have the ball in his hands when it mattered most.

• Inconsistent scorer. In early January just days after Arkansas beat Texas A&M to open SEC play thanks to Jones' late-game 3-point daggers, I wrote for Hawgs Illustrated that Jones, while being without question one of the better all-around players on the roster, was the Razorbacks' most hit-or-miss guard. When he's good, he's great, and when he's off, it can be hard to watch because other factors then come into play (see the next bullet point).

Five times this season Jones scored at least 15 points in a game then finished with six or less in the following game. Most notably, he scored 30 points in Arkansas' home loss to Mississippi State then added a conference-low four in the blowout loss at Auburn. He was pulled from the starting lineup in the second half of that game, and did not start the final eight. In March, Jones addressed his up-and-down play and said he put a lot of pressure on himself to be productive. He harps on himself because he knows he can be better in games in which he shoots 1-of-9 or turns the ball over 4-5 times. Anderson attempted to take some of that pressure off of him by bringing him off the bench, and it looked to work for the most part. He shot 53.1 percent from 3-point range in the final month of the season.

• Struggles with mental side of the game on occasion. With junior college players, they're often asked during the course of their first Division I season what their transition has been like. Jones was blunt when talking about his personal experience coming to Arkansas from Connors State in Oklahoma: he was ready to go for some games, and not so much other times. Preparing for games is crucial, especially for one of the team's key figures, and taking care of his body is another area that needs greater attention, he said.

And during games when Jones didn't have it, it was evident through his body language. Often times when trying to get himself going again, he would ball his fists and knock his knuckles against his head or sharply strike his thigh. Late in the season, I saw Jones moving freely within the offense and playing without thinking too much, which benefitted him. Not overthinking the game should be a big point of emphasis for him moving forward.

Best Jones quote: "I knew I wanted the ball at the end. I knew I wanted to take us home, so I did what I had to do." - Jones after hitting the game-winner at LSU on Feb. 2

Best quote on Jones: "If I remember correctly, he was somewhat of an overweight young man. No, we didn't recruit him. We should have, but we didn't. It's an amazing story. What I know about him is he was not very highly sought out of high school. He really has developed himself into a nice player." - Texas State coach Danny Kaspar after Jones scored 21 points on the Bobcats in a 73-70 win on Dec. 22