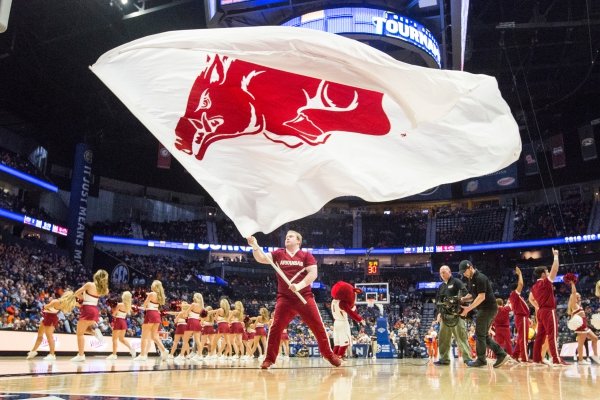 Arkansas vs Florida Thursday, March 14, 2019, during the second round game in the SEC Tournament at Bridgestone Arena in Nashville.

FAYETTEVILLE -- The emphasis SEC schools have placed on basketball -- mandated by the late Mike Slive as commissioner after the conference had three teams in the NCAA Tournament in 2013 and 2014 -- is evident the past two seasons.

The SEC had a record eight teams make the NCAA Tournament in 2018, and this season followed it up with seven.

But there's a less cheerful side to the SEC's progress in basketball. It means more coaches are losing their jobs.

Four SEC coaches were fired after competing their seasons, including Mike Anderson, who had a 169-102 record in eight seasons at the University of Arkansas. Also fired were Alabama's Avery Johnson, Texas A&M's Billy Kennedy and Vanderbilt's Bryce Drew.

[WALLY HALL: Is Arkansas talking to Sampson a joke?]

It's possible there could be a fifth SEC coaching change with LSU's Will Wade suspended indefinitely since March 8 by his school's administration after he refused to discuss alleged recruiting violations he was heard discussing on a phone conversation recorded by the FBI.

"When you're at a high-profile job such as coaching men's basketball in the SEC, you've got to understand now that many times change comes with the territory," said Andy Kennedy, an SEC Network analyst who was Ole Miss' coach for 12 seasons. "Each year you realize that you're ultimately playing for the opportunity to continue in the profession."

Anderson never had a losing season at Arkansas, but the Razorbacks made only three NCAA Tournament appearances (2015, 2017 and 2018). They were 18-16 this season and played in the NIT.

Billy Kennedy took the Aggies to the Sweet 16 in 2016 and 2018, but those were their only NCAA Tournament trips in his eight years. The Aggies went 14-18 this season.

Drew lasted three years at Vanderbilt after the Commodores ended this season with a 20-game losing streak after star guard Darius Garland -- a projected NBA Draft lottery pick -- suffered a knee injury. They finished 9-23, including 0-18 in SEC play.

Johnson, an NBA point guard for 16 seasons who was a head coach for the Dallas Mavericks and Brooklyn Nets, said he wanted to remain at Alabama after the Crimson Tide lost their NIT opener to Norfolk State, but he ended up with a negotiated contract buyout and one NCAA Tournament appearance in four years.

Alabama Athletic Director Greg Byrne hired Nate Oats from Buffalo -- where he led the Bulls to a 96-43 record and three NCAA Tournament bids in four seasons -- to replace Johnson.

Virginia Tech Coach Buzz Williams, a former Texas A&M assistant who led the Hokies to the Sweet 16 this season, reportedly is the Aggies' top choice.

Jimmy Dykes, a walk-on player at Arkansas who is now an ESPN analyst, said under different circumstances Williams would be a good candidate for Razorbacks Athletic Director Hunter Yurachek.

"If the Texas A&M job wasn't open, maybe Hunter could get Buzz Williams to Arkansas," Dykes said. "But Texas A&M has a great recruiting base in Texas, and they've got more money than they know what to do with."

Houston Coach Kelvin Sampson has been speculated as Arkansas' top choice because Yurachek worked with him for three years as Houston's athletic director.

"If Arkansas is fortunate enough to pull Kelvin away from Houston, that's a home run hire," Dykes said. "He still has a ton of energy as a 63-year-old guy. He's fiery and competitive out on the recruiting trail.

"If Hunter is able to talk Kelvin into coming to Arkansas and making one last run in a Power 5 league that can produce national champions, that would be the hire of the year so far in college basketball. I think it's Kelvin's job to turn down."

But there are reasons for Sampson to stay at Houston, considering he's being offered a six-year, $18 million contract extension after leading the Cougars to a 33-4 record and their first Sweet 16 appearance since 1984.

"Here are the things the Houston job has going for it in a major way," Dykes said. "They're in an NBA city -- and college players want to be around NBA players in the offseason -- and they're in a league [the American Athletic Conference] that gets multiple NCAA Tournament bids.

"Houston also has new facilities, strong financial backing, and a fan base that is now all in again."

Andy Kennedy and Dykes agreed Arkansas remains an attractive job even though the Razorbacks haven't been to the Sweet 16 since 1996, with six NCAA Tournament bids since 2001.

"On the outside looking in, is Arkansas a top 10 job in the country? I would say, no," Kennedy said. "But I do think it's a very good job.

"First and foremost, you've got a passionate fan base because you have a history of success. Even before the 1990s when Coach [Nolan] Richardson took Arkansas to a national championship, you still had a tradition of winning.

"You have a state-of-the-art facility in Bud Walton Arena. You're the state university in Arkansas, the big hog so to speak. You're in a power conference."

Dykes believes Arkansas is the best SEC job that is open, but he says there are challenges.

"I think Arkansas is a good job right now," said Dykes, who lives in Northwest Arkansas. "We who are close to it, we see the potential for it being a great job. Fayetteville is a great place to live, and Arkansas has a fan base that will really, really back that team when they're winning.

"The coaches that are going to be talked to about the Arkansas job and are considering it, they're going to do their homework, but they know that Arkansas cares about basketball. They want to win here. That's the first thing I think Hunter will try to sell the new guy on is how important basketball is to the state of Arkansas."

Dykes said Arkansas fans are among the most loyal in college basketball.

"I've been to every big-time arena out there, and when Bud Walton Arena is full and it's a meaningful game, it's as good of an environment as there is around the country," he said. "The passion for basketball is a big plus for Arkansas."

"The hurdle for a coach to overcome at Arkansas is the natural recruiting base is just not here," Dykes said. "So coaches know, 'OK, I've got to go outside this state if I'm ever going to win an SEC championship or a national title. Can I get players out of Texas or get them from other SEC states?' That's probably the biggest concern.

"Then the second-biggest concern is, 'Do I want to get in this league right now when arguably it's as good as it's ever been?' "

Dykes said despite those hurdles, plenty of quality coaches are interested in coming to Arkansas.

"It's not a great job right now," Dykes said. "But it can be if the right guy gets things going again."