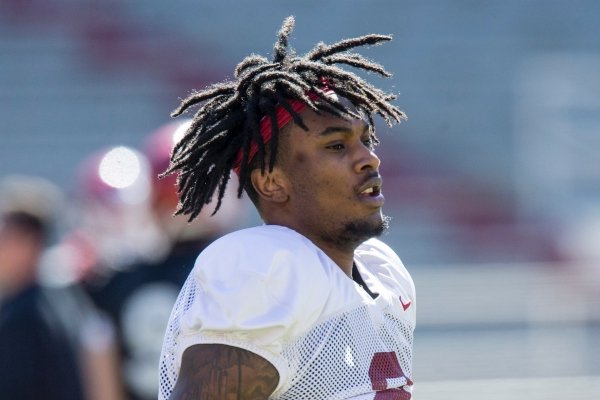 Arkansas defensive back Kamren Curl during spring practice on Saturday, March, 9, 2019, at Razorback Stadium in Fayetteville.

FAYETTEVILLE — The projector screen in Arkansas' team meeting room in the Fred W. Smith Center displayed a graphic that read "Belt Winner!?" as safety Kamren Curl entered with his right arm raised in the air.

As Curl made his way from the meeting room door to the raised platform at the front of the room to cheers from other defensive players, he wrapped the Razorbacks' championship belt around his waist and Chad Morris stepped back to allow him to bask in his moment.

Following a strong showing at last Thursday's practice, the ninth of the spring, Curl was awarded the prize of the Arkansas' spring drills on Friday. He finished with an interception that day, according to linebacker Bumper Pool.

A player may also be given the belt for most tackles, turnovers forced and big plays throughout practice.

There's been but one day - Tuesday - the defense didn't win the belt this spring, and Curl has been a key reason why.

"I think he's, as I shared with him, he’s been one of the top performers this spring, in my opinion," Morris said Tuesday. "Just watching him and his consistent play, I think from his leadership to the way he’s performed this spring, even coming back in January, just the way he’s approached his day-to-day work, coming back in January and leading into the second quarter of spring ball.

Curl started 11 of 12 games in 2018, missing only the season finale at Missouri after being suspended for reportedly mingling with members of the Mississippi State spirit squad prior to Arkansas' 52-6 loss in Starkville.

He's since turned the corner in terms of buy-in.

"(He is) understanding that he’s such a leader now on that defensive side. I think he's been one of our top performers this spring, especially on the defensive side," Morris said. "He and Sosa (Agim) both, because I think both guys have been challenged and they have responded to the challenge.

"The challenge has been, 'We've got to have more consistency out of both of you,' and they've done that."

Curl, with the departures of former safety Santos Ramirez and linebacker Dre Greenlaw, is the team's No. 2 returning tackler entering 2019 - 53. He also finished with five pass breakups last season, which tied for second most on the team. Curl grasps the fact that he has to step into the limelight this fall for Arkansas' defense to take a step forward.

“I just turned 20 and I’m the most experienced guy, so I’ve got to grow up," Curl said. "That’s what I’ve been doing since I got here. My first game when (Ryan) Pulley got hurt (in the 2017 season opener) I had to step up, so it’s nothing new.”

Defensive backs coach Ron Cooper, prior to spring ball, said he expected Curl to have his best spring yet considering his knowledge of Arkansas' defensive scheme.

"Now we can hone in on technique, fundamentals and footwork and understanding what the offense is trying to do, understanding the different route combinations," he said. "What do they want to do when they're 3-by-1, 2-by-2, two backs in the backfield?

"It’s time for him to move forward that way."

D'Vone McClure added last week that Curl has impressed him this spring as well, and the junior is not shying away from contact.