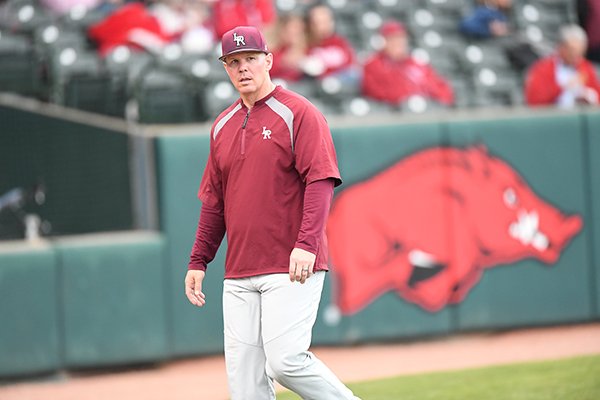 UALR baseball coach Chris Curry walks toward the dugout prior to a game against Arkansas on Tuesday, April 2, 2019, in Fayetteville.

FAYETTEVILLE — Arkansas-Little Rock coach Chris Curry had what turned out to be an ironic thought as he met with Arkansas coach Dave Van Horn just minutes before their game Tuesday night.

Should Curry ask for a run-rule situation, often put in place on mismatch Tuesday games after conference play starts in the middle of the college baseball season. It’s a good way to save pitching for the weekend.

“I did think about asking Dave for it,” Curry said. “But I didn’t bring it up.”

Oh, wow, it almost came in to play as UALR thumped the No. 9 Razorbacks in every possible way in a 17-7 waltz that finished with the 50 or so Trojan faithful who made the trip to Fayetteville cheering atop the visitor’s dugout.

Almost anyone would have thought it was going to be a mismatch the other way. Arkansas entered at No. 6 on the NCAA RPI list after a 22-6 start. UALR had lost 18 times in the first two months and stood at No. 187.

They played like the rankings should be reversed, mainly because two of the most talented Trojans finally hit their stride.

Powerful left fielder Troy Alexander entered with a .212 batting average, although there were five homers in his 22 hits. Lefty pitcher Ethan Daily entered with a 11.77 ERA with three losses in his only decisions in 10 appearances.

Alexander is a senior from Houston, via Alvin (Texas) Community College. He hit a grand slam in the fifth inning to turn a 6-3 deficit into a 7-6 lead and ignite the Trojans.

Daily is a senior lefty pitcher from Start, La., after two years in Hinds (Miss.) Community College. He had been shelled by Mississippi State in a game attended by friends and family. Several of his Hinds teammates play for the Bulldogs.

Daily allowed just three hits and one run in shackling the Hogs over the final five innings, his best stint of the season.

“I’m sure this was a bigger game for Coach (Curry), than for almost all of us,” Alexander said.

“I probably was more nervous in Starkville,” Daily said. “But pitching in that game in front of 7,000 probably helped me tonight. It may have helped a lot of us because we had guys step up who had been struggling.

“I had been in a struggle. So had Troy.”

The main part of the education centered on the fact that UALR had never played Arkansas in any major sport, for sure in baseball.

“They know about Arkansas baseball,” Curry said. “They know they are a power and that this is a Tuesday game.”

However, Curry is not stunned with some of the performances.

“Alexander has that kind of power, he’s just been inconsistent,” Curry said. “He had struggled at Oklahoma State to the point that he came to my hotel room to apologize. He’d been trying to do too much.

“Obviously, Daily has struggled, too, but he’s got big-time stuff. He was probably going to pitch anyway tonight because we have to save others for the weekend. But we thought with his (lefty) stuff and their lineup (with lots of lefty hitters), there might be a big spot in the game. It came up tonight and then he just kept going.

“The key is always, can he get it over the plate. He did tonight. He was really good. He has a big arm.”

Indeed, of Daily’s 86 pitches, 60 were for strikes. He entered in the fifth inning with the Trojans nursing a one-run lead. With the bases loaded, he retired Casey Martin, Heston Kjerstad and Dominic Fletcher, the heart of the Arkansas lineup.

Daily didn’t know much about the UALR-Arkansas history, but said some of his teammates brought it up earlier in the week.

“Some of our guys grew up playing as kids wearing Arkansas jerseys,” he said. “They talked about it.”

However, Curry said it’s not something most of his team has in their upbringing. Only one Trojan who played in the game – winning pitcher Ty Gordon – grew up in the state.

Gordon (2-1) played high school baseball at Paragould, then went to Three Rivers College, a junior college in Poplar Bluff, Mo. Gordon recorded two outs in the fourth and faced just eight batters. He gave up four hits, allowing three inherited runners to score as the Hogs took the lead. It was the last bright spot for the home team.

It looked like it would be a 17-15 game at that point. Even Curry thought that.

“I thought it might,” he said. “I was just trying to coach the moment, thinking it was probably going to be a hit fest. Even when we got that lead, I didn’t look at the scoreboard.”

And, he hadn’t looked at his phone until a reporter asked him to check it an hour after the game.

“It’s connected to my (Apple) watch,” he said. “It’s been buzzing nonstop for the last hour.”

The phone came out. Curry smiled, then displayed the text icon.

“I’ve got 36 (texts), 21 twitter messages,” he said. “I can think back to some points over the last five seasons (at UALR) and the only messages were from my family. My phone was dead quiet.

“So, yes, this is monumental. It’s a huge game. I don’t want to understate it, but what it will be is something to remind them of as we go through the season, what they are capable of and what they can do.

“But let me say this: I know what it is, it’s one game on Tuesday night by us, against a team that was second in the nation last year. It’s just one game.”

The smiles and celebration hugs were still happening in the stands and in the dugout as Curry explained that.

“It was a huge stage and our guys didn’t blink,” he said. “I’m proud of our players.”

And, he knows it’s big for his program. His players might not know state history, but Curry does. Raised in Conway and a former coach for Van Horn at Arkansas, beating the Razorbacks is a big deal.

“I followed what has gone on around here and in our state,” he said. “Being a kid raised here, I know what this game means.”

Then Curry’s phone buzzed again. He smiled and headed to the bus. It promised to be a fun trip home.