Offense gets best of defense 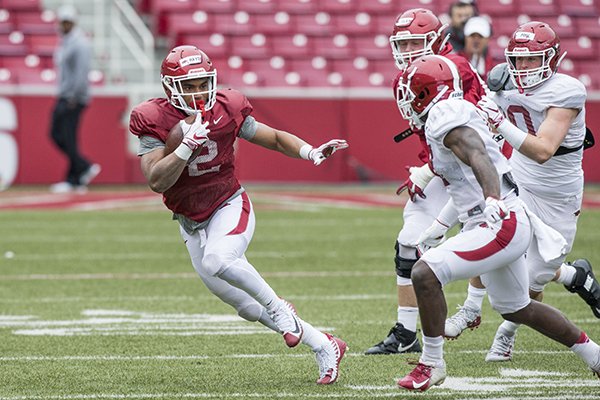 FAYETTEVILLE -- The Arkansas Razorbacks' offense got the breakthrough they had been looking for on Tuesday.

The offense claimed the team's championship belt following spring practice No. 12 on a bright, sunny day on the practice fields at the Smith Football Center.

"I thought it was a really good day offensively, probably one of the best days they've had this spring," said Coach Chad Morris, who was the only team member to speak to the media afterward. "They won the belt today, which was good. They've been close, but turnovers have prevented that.

"Today they did much better on the turnovers. While we still had two turnovers, they were able to execute on first down and some big plays gave them the opportunity to win the belt."

Among the big plays was a long run by Chase Hayden, who did the same in Saturday's scrimmage, which led to a touchdown.

Morris said the offense was denied earlier this spring when it could have taken the belt, which the coaching staff has turned into a competitive event.

"There was a day that they should have won it, but because of lack of communication among some of the support staff, they defaulted the belt," Morris said. "It's on everybody, absolutely."

Morris said consistency in production was one of the biggest factors that turned the belt to the offense.

"The lack of TFLs, which is a big thing that we count, tackles for loss, was huge," Morris said.

The defense notched a large number of tackles for loss in last Saturday's second scrimmage of spring.

The flu that has bounced around the program for a couple of weeks claimed quarterback Daulton Hyatt on Tuesday.

Coach Chad Morris said he hoped to have tailback Devwah Whaley back for Thursday's practice, the last workout prior to Saturday's Red-White game.

Tight end Cheyenne O'Grady (lower back) is continuing to be evaluated, and Morris said they would have more news on him today. Nickel back D'Vone McClure (concussion protocol) should be fully cleared in time for the Red-White game, Morris said.

Morris said he expected to have lineman Drew Vest for the spring game, and that it's possible center Silas Robinson (knee) is ready for the game.

The news on Colton Jackson's right knee was better than expected following an arthroscopic procedure.

"He went in and had his surgery and it wasn't near what we thought it was, so he'll be back a lot quicker," Morris said. "He'll be back probably in a couple of weeks."

Coach Chad Morris said after Tuesday's practice that he planned to go to Baum-Walker Stadium to take in some of the Razorbacks' ground-breaking in-state game against the University of Arkansas a Little Rock.

"You know what, I've got a bunch of stuff going on, but I am going to make my way down there," Morris said prior to his news conference, which came with the baseball game in the second inning.

The Razorbacks did not open practice with the new "Attack" drill that has quickly caught on as a team favorite.

The linemen were Kirby Adcock, Silas Robinson and Drew Vest. Also in green were linebacker Hayden Henry, who is rehabbing from labrum surgery, and D'Vone McClure, who is still rebounding from the concussion protocol he was in last week.

A group of university professors attended the practice and stuck around after for some fellowship.

"We invited our professors out to watch practice and be around and we'll have our professor dinner tonight," Coach Chad Morris said.

"It's something we've been doing for quite some time. It's an opportunity for our players to invite their professor, whichever professor they choose. We've been working on this now for several months. They have to personally invite them, and invite them to practice if they want to come. And if not come eat dinner with them.

Kevin Crass, chairman of the War Memorial Stadium commission, attended the practice along with his son, Will.

Chad Morris invited a group of volunteers from Arkansas Children's Northwest Hospital to attend practice, tour facilities and "just be a part of our program."