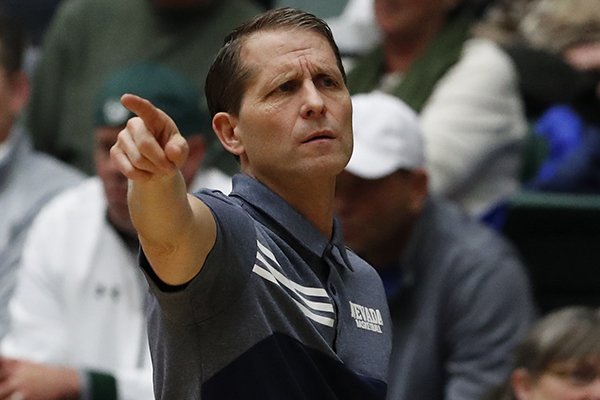 FAYETTEVILLE — Kelvin Sampson isn’t going to be the next basketball coach at the University of Arkansas.

Sampson, 63, is finalizing an agreement to remain at University of Houston, according to a report Tuesday by the Houston Chronicle.

Lawyers for Sampson and Houston were still going over contract language Tuesday night, the Chronicle reported, but that there were no issues that would prevent the agreement from being done.

Houston has offered Sampson a six-year, $18 million contract extension according to Tilman Fertitta, the chairman of the school’s board of regents. He had two years left on his existing contract that paid him $1.6 million annually.

Sampson was considered a leading candidate to replace Mike Anderson as Arkansas’ coach because he worked with Razorbacks Athletic Director Hunter Yurachek at Houston. Yurachek was an associate athletic director when Sampson was hired as Houston, then served as athletic director for three years before coming to Arkansas.

With Sampson’s decision to stay at Houston, the next target for Arkansas could be Nevada Coach Eric Musselman, who has a 110-34 record in four seasons with the Wolf Pack, including three consecutive NCAA Tournament appearances highlighted by a run to the Sweet 16 in 2018.

Marc Johnson, Nevada’s president, said the school would work to fend off a challenge from Arkansas to hire Musselman.

“We certainly want to keep Eric Musselman here,” Johnson told the Reno Gazette Journal on Tuesday. “He’s had a great run in this community, the community loves him, he’s had great success here, and we’d like to see that continue.”

Johnson said he wouldn’t comment on what kind of salary he would offer to keep Musselman at Nevada.

“We talk to him all the time, but it’s an extremely competitive marketplace, and there are different viewpoints,” Johnson said. “You get the coach at Gonzaga [Mark Few], who I’m sure could have gone away for lots of money, but he really enjoyed the Gonzaga community and wanted to see that develop. And he did develop a relatively small school into a phenomenal team and he did that by building a program over many years.”

Musselman’s wife, Danyelle Sargent, told the Gazette Journal via a text message, “He’s here in Reno with no plans to go anywhere.”

Musselman, 54, is paid $1 million annually and has three years remaining on a five-year contract extension he signed with Nevada after the 2016-17 season. He would owe Nevada a $1 million buyout if he leaves before March 31, 2021.

Florida beat Nevada 70-61 in the the first round of the NCAA Tournament this season. The Wolf Pack finished with a 29-5 record.

Musselman was an NBA head coach for three seasons with Golden State and Sacramento and had a combined 108-138 record. He’s had several assistant coaching jobs in the NBA and on the college level, including SEC experience as an LSU assistant during the 2014-15 season.