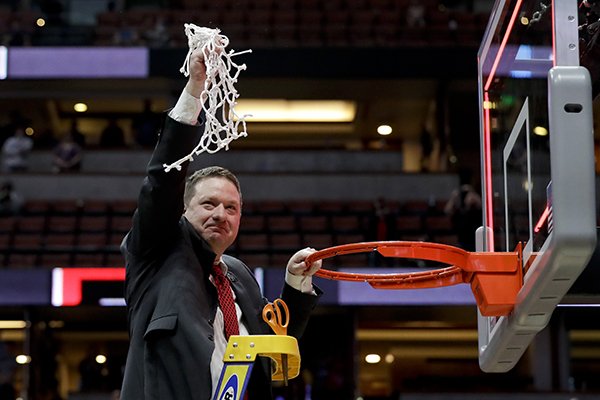 FAYETTEVILLE -- The search for the University of Arkansas' next basketball coach likely could extend into next week.

That's because a top target is still coaching his team, and it's not NIT finalists Shaka Smart (Texas) or Casey Alexander (Lipscomb).

Arkansas Athletic Director Hunter Yurachek wants to talk to Texas Tech Coach Chris Beard -- who has led the Red Raiders to their first NCAA Tournament Final Four appearance and a matchup against Michigan State on Saturday -- according to sources, but any conversation will have to wait until the team's season ends.

It's debatable if Beard would leave Texas Tech for Arkansas or any other job considering he has a 57-16 record the last two seasons with the Red Raiders.

But Arkansas officials hope to at least gauge Beard's interest and make him an offer to return to the state to coach the Razorbacks.

Beard, 46, spent the 2015-16 season as the University of Arkansas at Little Rock's coach and led the Trojans to a 30-5 record, Sun Belt Conference regular-season and tournament championships and an NCAA Tournament appearance, where they beat Purdue before losing to Iowa State.

During the Red Raiders' run to the Elite Eight last season, Beard signed a six-year, $19 million deal that is paying him $2.8 million this season with the contract gradually increasing to $3.3 million through the 2023-24 season

The contract has a current buyout of about $6 million if Beard were to leave after this season.

"It would be my intention to be able to have that conversation Tuesday or Wednesday," Hocutt said. "And Chris and I have talked about this."

Hocutt said discussions between he and Beard about a new contract began in late February.

"I would say out of our focus and Coach Beard's focus and commitment to this team and this season, we decided to hit the pause button until the season is over," Hocutt told the Morning News.

Texas Tech has begun construction on a $30 million practice facility, and Hocutt said he believes in the school's ability to continue investing in its basketball program and keep Beard.