The power of three: Running backs a strength for Hogs if they can stay healthy 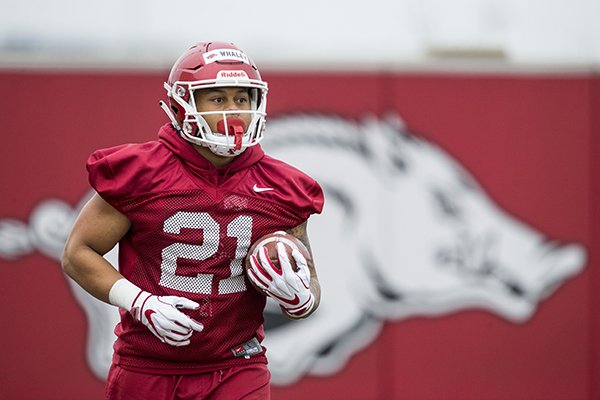 FAYETTEVILLE -- The University of Arkansas might be short on experienced personnel at several positions around the roster, but running back isn't one of them.

As long as the assemblage of talent can stay healthy.

The Razorbacks might be able to match speed, power and experience at the tailback spot with its SEC West peers when the trio of Rakeem Boyd, Devwah Whaley and Chase Hayden is all at maximum strength.

That hasn't been the case this spring with Boyd and Whaley out of full contact for much of the period. Boyd has been rehabbing from shoulder surgery, and in the last couple of weeks he's taken some hand-offs in non-contact group work to stay sharp on the playbook.

Whaley, who underwent ankle surgery after a good game against Ole Miss last Oct. 13, hasn't done live work since the first Razorbacks scrimmage, which he opened with a 40-plus yard run to set up a Hayden touchdown.

"We hope to have him back Thursday and to be back out there practicing and playing some on Saturday," Coach Chad Morris said. "We'll know more tomorrow. I know he's feeling better."

Arkansas had a streak of five consecutive seasons with a 1,000-yard rusher snapped in 2017 and the drought continued last season when Boyd was the top rusher with 734 yards, followed by Whaley (368) and Hayden (251).

Where the running game suffered was cashing in touchdowns for the backs, with the lead three combining for five rushing scores. Departed quarterback Cole Kelley held the team lead with three rushing touchdowns.

The Razorbacks hope to increase productivity in both yards and touchdowns in Year 2 under Morris.

The Razorbacks established their running attack in a few games last season, but understand it will have to be much more consistent for the teams to staring winning games in the SEC West.

Whaley opened 2018 as the starter and rushed for a career-high 165 yards and a touchdown in the Razorbacks' 34-27 loss at Colorado State in the second week.

By Week 5, Boyd had emerged and wound up piling up 423 rushing yards in a four-game span, including 100-yard efforts against Alabama, Ole Miss (106 in the first quarter alone) and Vanderbilt, plus a 99-yard game against Tulsa.

Hayden has been breaking off big runs in most of the live scrimmaging throughout the spring, which could set him up for a bigger role in the backfield this fall.

The Memphis native had a team-high 249 rushing yards and three touchdowns as a true freshman in 2017 before suffering a lower leg fracture in a home loss to Auburn in Game 7.

Hayden was behind Whaley and Boyd on the depth chart last year and wound up averaging 4.4 yards on 57 carries, down from a 5.3 yard average on 61 carries in his abbreviated 2017 season.

"It's not really what I expected," Hayden said. "Coming back from an injury, it's a lot to go through, especially a lower leg injury.

"Probably this spring ... is the first time I've felt fully healthy for a while. I had a hamstring at the beginning of the year last year, so I'm just trying to get healthy and I'm feeling better now."

Morris, offensive coordinator Joe Craddock and running backs coach Jeff Traylor have noted a jump in Hayden's knowledge of the system and his performance the last several weeks.

"The reps that Chase has gotten this spring I think have benefited him," Morris said. "I think he's had a tremendous spring.

"I think that he has really picked his game up in some areas that we challenged him with. From learning pass protection, which he's been very, very sharp with, understanding the offense a little bit more. But he's done a great job. I'm very proud of Chase."

Whaley said he slimmed down with the loss of body fat during the offseason to be a sleeker back. He's listed at 209 pounds, similar to his playing weight last year.

At full strength, the Razorbacks offer one of the best three-man tandems in the SEC. Boyd was outstanding as a sophomore transfer, showing a combination of speed, power and vision. Whaley lost weight with the intention of being more nimble and not just a between-the-tackles option as he’s been for the bulk of his career. Hayden flashed home-run potential as a freshman but was slowed last season. Hayden’s improvement at picking up pass protection assignments will help him get on the field more this fall. All three of those players have shown solid hands catching passes out of the backfield. Converted cornerback Curtis and signee Spivey look to be the next options.

"It's still the game, it's just more muscle," Whaley said after the first spring scrimmage. "We've been hitting the weight room hard."

With the injuries to Boyd and Whaley, the transfer of Maleek Williams, and would-be senior T.J. Hammonds out while trying to get his academics in order, some shuffling ensued at the tailback spot during spring practices. Redshirt sophomore Jordon Curtis, a cornerback signee, moved to tailback, changed jersey numbers from 32 to 20 and has gotten plenty of work through 12 spring practices.

A quartet of walk on running backs have joined the roster at various points this spring to take some of the load off Hayden and Curtis. Signee A'Montae Spivey will join the club in the summer.

Curtis has showed flashes of speed and the ability to run through contact in the limited glimpses of live work available to the media.

"Jordon Curtis, moving from corner to running back, it's been a little bit kind of overwhelming at times with him," Morris said. "He's been inundated with a lot of information, but he has done some good things.

"We've seen some flashes there, so we'll continue to bring him along. I wish Devwah would have been back for the majority of spring, but he's not. We'll get Rakeem back in the fall, and we'll go from there. A'Montae will be coming in, and we expect him to be ready to play."