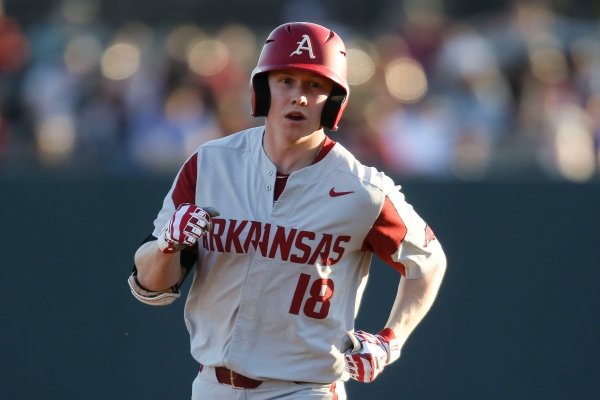 The 17th-year Arkansas coach added: "It's probably the biggest win we've had all year because of the way we lost Game 1."

Heston Kjerstad hit a leadoff home run in the top of the 15th inning to give the Razorbacks the lead, and Matt Goodheart added a two-run double later in the inning as Arkansas held on for a thrilling 9-6 victory at Plainsman Park that lasted 5 hours, 40 minutes.

The 15 innings were tied for Arkansas' most in a regular-season Southeastern Conference game (South Carolina, 2002) and were tied for the program's third most in any game.

The No. 9 Razorbacks and No. 15 Tigers split their doubleheader Friday and are scheduled to play the series finale Saturday at 1 p.m., although rain is forecast for much of the day. Auburn scored six unanswered runs to win 6-3 in Game 1.

Kjerstad's go-ahead homer came in his eighth at-bat of the game after a 0-for-7 start. Kjerstad crushed a 2-2 curveball from freshman left hander Carson Skipper over the fence in right field.

"He was behind in the count real quick and hadn’t had a real good game," Van Horn said. "He fouled off a couple and left a couple down in the dirt, which was good to see. He got a mistake, kind of a hanger and hit it out of the park.

"That was a big swing, gave us the lead and gave us a little more hope over in the dugout."

The Razorbacks' first four batters reached in the inning as both bullpens labored. The teams combined to use 11 pitchers who threw a combined 540 pitches.

Cronin entered the game with runners on second and third base in the eighth inning, but struck out Will Holland and Steven Williams to preserve a 4-4 tie. Cronin loaded the bases with a two-out single and a pair of two-out walks in the ninth, but struck out three-hole hitter Edouard Julien to send the game into extra innings.

"You're 90 feet away from a doubleheader sweep against a top-10 team, but it didn't happen,” Auburn coach Butch Thompson said. “Our guys competed the entire day. If I could just put one more hit or walk or HBP in there, we could've found a way to win. We're playing a great team that's going to keep battling just the same."

Auburn appeared to have won the game and dog piled in the 10th inning when catcher Matt Scheffler singled to bring Williams home from second base. But the Razorbacks appealed the play and replay showed Arkansas catcher Casey Opitz tagged Williams before he scored. Left fielder Christian Franklin was credited with the assist.

"It’s just crazy when you think about” the play, Van Horn said.

Arkansas went ahead 6-4 on Trevor Ezell's two-run home run over the 30-foot wall in left field in the top of the 12th inning. The home run came against Skipper, who replaced Auburn closer Cody Greenhill to start the inning after Greenhill threw three scoreless innings.

Greenhill, Skipper and reliever Elliott Anderson all threw in both games of the doubleheader for Auburn.

The Tigers answered with two runs in the bottom of the 12th inning to extend the game. Julien scored on a wild pitch by Kole Ramage to pull Auburn within 6-5, and the Tigers tied the game on a Ryan Bliss sacrifice fly.

Ramage pitched a quality 4 2/3 innings three days after taking the loss in a midweek game against Arkansas-Little Rock. He left the game after Auburn loaded the bases on a single, a walk and a hit batsman in the 14th.

Kevin Kopps entered the game with two outs in the inning and struck out the Tigers' leadoff hitter, Judd Ward, to send the game to the 15th. Kjerstad hit his home run moments later.

Kopps earned the win on the same day he was tagged with his third loss in less than a week. He allowed the Tigers' go-ahead run in the eighth inning of Game 1.

In the second game, Kopps retired all four batters he faced. The game ended on a great diving catch by Dominic Fletcher in center field.

Arkansas (23-8, 7-4 SEC) won the nightcap despite stranding 18 base runners, one shy of the school record set against Tennessee during a 12-inning game in 2002.

“(Auburn) made some really good plays defensively that saved a lot of runs in that second ballgame,” Van Horn said. “We’ve got to do a better job of driving in runs when we’ve got an opportunity. We left a lot of people on today."

But the Razorbacks' pitching staff also worked around several Auburn runners. The Tigers (23-8, 7-4) stranded 16 overall and seven in the extra innings.

Auburn put its leadoff hitter aboard in the 10th, 12th, 13th and 14th innings, but came away scoreless in three of those four innings.

“It just seemed like they had runners all over the bases in extra innings," Van Horn said, "and we kept fighting and finding a way to get to that next at-bat."