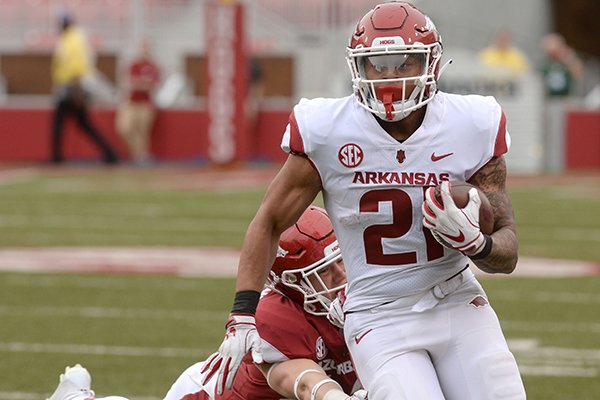 Arkansas running back Devwah Whaley (21) carries the ball Saturday, April 6, 2019, during the Razorbacks' spring game in Razorback Stadium in Fayetteville.

FAYETTEVILLE -- University of Arkansas running back Devwah Whaley was the leading rusher in Saturday's Red-White game after missing most of the spring with a back injury.

Whaley had 13 carries for 45 yards, including an 8-yard touchdown run in the third quarter. He also had a 19-yard reception.

"He felt good, ready to go, and he needed the work," Razorbacks Coach Chad Morris said. "He needed as much as he could get today. This was about having a good workout.

"I know it's a spring game, but we had to get good execution, a good workout out of this thing. This was the last full-padded live practice we're going to have until the fall, and so he needed everything he could get today.

Redshirt freshman offensive lineman Noah Gatlin said it was great having Whaley back on the field.

"We haven't had a whole lot of depth at running back, but having him back out there, the running game really opened up today and he ran the ball well," Gatlin said. "He ran the ball hard, broke some tackles, scored."

"Devwah has a lot of experience and has been a great player here for a while, so getting him back, having the experience out there, it's been helpful," quarterback Ben Hicks said. "Not having him out there has hurt us a lot and being able to get him out there, he looked good. He looked like he was having fun. He looked healthy, so obviously a big get for us today."

Arkansas' defensive players also were excited to see Whaley back.

"It came at our expense," defensive lineman McTelvin Agim said. "But good to see him make some plays."

Defensive tackle McTelvin Agim joked with reporters Thursday that what he hoped fans would see at the Red-White game was him doing a lot of coaching -- meaning he would be sitting out -- but he started and played several snaps in the first half.

"It definitely felt good to get out there, though," Agim said. "And once it was time actually for me to shut it down, it was kind of hard to do that.

"I actually wanted to keep going. It's that competitive edge. You can say you want to coach, but it's hard when you actually settle down."

Receiver Koilan Jackson provided fans the first "wow" moment of the day. During a deep-pass drill down the sideline in pre-game warmups, Jackson stuck out his right hand and snagged a 30-yard pass from Ben Hicks for a touchdown to draw some "oohs" from the early arrivers.

In the second half, Jackson did it again, hauling in a flipped pass with his left hand from John Stephen Jones on a rollout for a 16-yard gain.

Last week, McTelvin Agim was talking to freshman cornerback Devin Bush about the excitement of playing in the Red-White game -- and in front of fans in Reynolds Razorback Stadium -- for the first time.

Bush created some excitement of his own when he intercepted a pass from John Stephen Jones and was credited with a 55-yard return for a touchdown.

"It was just good to see him out there making plays and flying around," Agim said. "When he came to the sideline you could see the excitement on his face. It kind of gave me my years back because I remember what it was like my first year."

The Red-White game had nice weather for the first time in three years with temperatures in the high 60s.

Two years ago, thunderstorms forced the game to be canceled and the Razorbacks had a normal practice. The day was made especially gloomy because running back Rawleigh Williams suffered a second neck injury that caused him to retire from football.

Last year when the Red-White game was played in Little Rock, temperatures were in the 30s with sleet and snow flurries.

Sophomore Jordon Curtis, who moved from cornerback to running back this spring, had 10 carries for 43 yards.

"Jordon's done some good things," Coach Chad Morris said. "He's provided us with some depth in there.

"It was good to see him get to the edge at times. I think he's very slippery. He's kind of hard to tackle when he gets through there.

"He's got a ways to go in pass protection and picking some things up, but I've been pleased with Jordon."

The number of Razorbacks on the sidelines was high.

Quarterback Connor Noland missed the game because he was with the baseball team in Auburn, Ala.