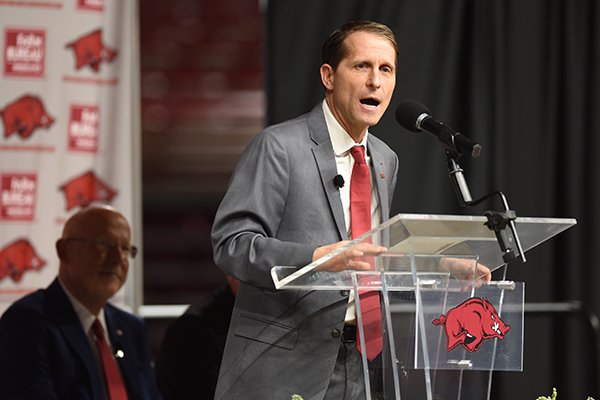 FAYETTEVILLE — Follow along as athletic director Hunter Yurachek introduces new basketball coach Eric Musselman. Arkansas players are here and sitting in the front row to the left of the stage.

• It's great to be home and it's a great day to be an Arkansas Razorback. Excited everyone is here as we welcome Eric Musselman and his family to Arkansas. He thanked Mike Anderson for all he gave to the program over the 25 years he spent here.

• Over the last 10 days during the search, Jon Fagg and I have been attached at the hip. Also thanked the entire athletic department and his own family. When I've been present, I've not been mentally present in the house, he joked. Yurachek's wife went out and got a new puppy during the search.

• This is a top-20 program, and I know it can seem like searches take a long time, but we found a great basketball coach and one who truly wanted to here. He truly understands what we're about in this state and the expectations we have for men's basketball. From the first time we spoke, Musselman said he and his family wanted to be here and part of this tradition.

• Musselman has a life-long passion for basketball. He was born into a basketball family and has a passion for teaching the game, developing men on and off the floor, and winning. You'll see all those traits today. He's high energy. "Watch out, Chad Morris," he joked. His basketball IQ is off the charts.

• Musselman and his family are excited to be joining the Arkansas Razorbacks family.

• Yurachek said he wanted a coach who said he really wanted to be here. I then went on a 5-mile run because I was so excited following that initial call.

• Thanks to Nevada for giving my family and I an opportunity there, and the players I coached over the years. He thanked his wife, his daughter and two sons for their support through all of this. It's a stressful time for your family more than anyone else.

• This program has an incredible tradition. Talked to Patrick Beverly and Corliss Williamson and Corey Beck. I talked to Corey at about 1:15 a.m. and we texted later on into the night. I can't wait to coach and call a timeout on Nolan Richardson Court. The passion from the fans here is second to none. We're going to give tremendous effort, energy and enthusiasm when we play. We like to call it Pace and Space.

• Mentors: Lucky to have been around a lot of great basketball minds. Of course my dad and Chuck Daly, who's maybe the greatest coach ever. Also coached with Doc Rivers. Daly was a master at getting along with players, Rivers was a master at the pregame motivation. I picked a lot of coaches' brains. David Fizdale worked with me, and he's now coaching the Knicks.

• Athletes have aspirations to play beyond college. There's so many areas I can provide expertise in.

• On the Nevada program building: We had to be the hardest-playing team in basketball. You have to gain the respect of opponents, boosters and alumni and you do that by playing for 40 minutes with great energy and enthusiasm.

• Offensive style: Pace and Space. We like to shoot 3s. Analytics will tell you shooting 3s and free throws is a good thing. Because there's so much freedom there, we're going to be more structured on the other end.

• Analytics: Certain numbers, yes, we'll try to motivate our guys with. NBA players are motivated by numbers, and we'll talk to guys, for example: You're one rebound away from a double-double. Go get it. I was lucky to live close to the Money Ball situation and was able to find out how we can flip that from a basketball standpoint.

HY: It's been an exciting 9-10 days and a great search process. This reconfirmed the perception of this basketball program outside of the state. I was excited the first time we spoke and could sense his energy and passion for the game of basketball. He embraced the history of the program and wanted to be a part of that and take the program to the next level.

HY: A weekend or so ago Jon Fagg spoke with Musselman's agent. We traveled to Reno to visit with him last Tuesday. We officially offered him the job on Friday.

EM: I believe Mike Anderson accumulated talent and a lot of young pieces. Players usually make great leaps after their freshman year, and we feel like we have to set high goals. Our goal is to make the tournament next season and it should be the goal every year. I think that's how our players feel.

EM: As of right now, I'm shocked and excited about the guys. Got to spend time with the team and ate with them. Right now they're excited and happy and ready to start on the court maybe later this week. I don't anticipate anyone leaving.

EM: As soon as Hunter called, I started watching film of the guys. I locked myself in the room to see the talent level. When Hunter and Jon came, I thought it was important they knew what I thought about the team. I wanted them to know I was invested. I continued to watch as much tape as possible between the first call and when we met.

EM: The building is awesome and the facilities, I was blown away. I've never seen an institution with such great facilities, then you combine that with fan passion and I think this job is second to none.

EM: The chance to win really big is ... any coach in the country would want that. Start diving into the tradition, you can win big here, there's no doubt.

EM: Transfers were a big part of the success we had at Nevada, but not enough people talk about the incoming freshmen. We did recruit high schools, and we believe this state has tremendous high school talent and look forward to recruiting Arkansas kids heavily.

EM: Each player is going to have his own workout plan, and we're trying to figure out who the staff is and who we want to extend offers to. I'm going to try to get on the floor with the players as soon as possible. Really, the bulk of the work is going to come in the two five-week segments coming up.

EM: I'll still probably be active on social media. The good thing about Arkansas is it already is a brand.

EM: You have to get to know your guys. You never know a player until you actually coach him. I have to learn how the pieces fit together. We're going to have to do a lot of team stuff to get to know each other. Everything is new. It's going to be a work in progress. Your team should improve throughout the course of the season. Our teams at Nevada always hit our peak in March.

EM: My teams play the opposite of how my dad's did. When I was on his bench with the Timberwolves I was yawning, like, telling him, 'Hey, let's get some transition points.'

HY: Letting Mike Anderson go was one of the toughest decisions I've had to make. I didn't feel like we needed to have a press conference following his dismissal. ... I wanted to run a search of the utmost integrity. There were members of my senior administrative staff who were not even involved.

HY: I take notes of coaches who are doing special things, then you take that list and find out if they have an interest in the position. If there is a mutual interest, then you move forward. I like to visit candidates in their homes. You have to then call some people who have dealt with the coach before and that kind of helps you narrow your list.

HY on Musselman's first meeting with the team: We had a cookout at my house. I thought it was a neat way to relax a little bit rather than to do it in the locker room.

HY: I knew I had the right guy when I offered the job to Musselman over the phone and my ear started shaking because he was so excited.

HY: We really zeroed in on about 4-5 guys from an initial list of about a dozen. I'm not talking to a coach while his team is still playing.

HY: Musselman's teams play hard throughout games. They may not play great throughout. ... He changed the culture of that program. They won 24 games in the two years prior to him going to Nevada and that program has not won fewer than 24 over the last four years.