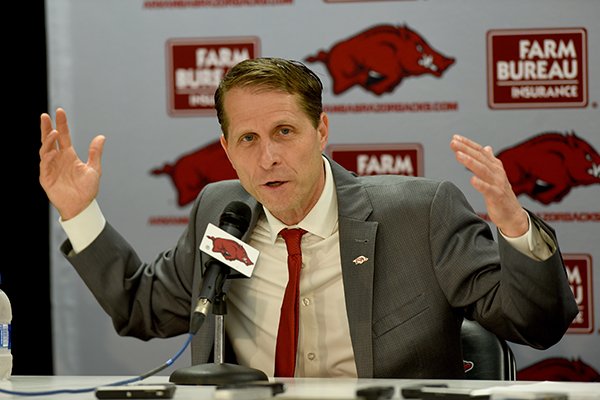 Musselman offered junior guards Kyree Walker and Dalen Terry of Hillcrest Prep in Phoenix, Arizona, on Monday, the same day he was introduced as the Razorbacks’ new coach.

ESPN rates Walker a 5-star prospect, the No. 4 small forward and No. 13 overall prospect in the 2020 class while Terry is a 4-star prospect by another service.

Weaver said Walker is of high character and has a strong work ethic.

“He fits Muss’ style as far as defensive, long, athletic guards that get out there and create havoc with their defense,” Weaver said. “He’s a hard kid to guard.”

Walker, 6-6, was also offered by Kansas on Monday. He’s thinking about reclassifying and becoming a 2019 signee.

“That’s a decision the family is going to make,” Weaver said. “I know they’re going through it right now. I know they’ve talked about it and they very highly considered it. So if he did, it wouldn’t surprise me.”

Musselman recruited Walker at Nevada and the Wolf Pack were reportedly one of his top two schools along with Memphis. Weaver believes Walker will visit Arkansas.

“He lead the nation in assists this year,” Weaver said. “Super long, 7-foot wingspan. He gets everybody involved. Super efficient. He can also play a 1-3. Very versatile. Dalton is a knockdown 3-point shooter. He’s a guy you can not leave open.”