Arkansas vs. ORU: How to watch and listen, forecast, pitching matchup, team comparisons 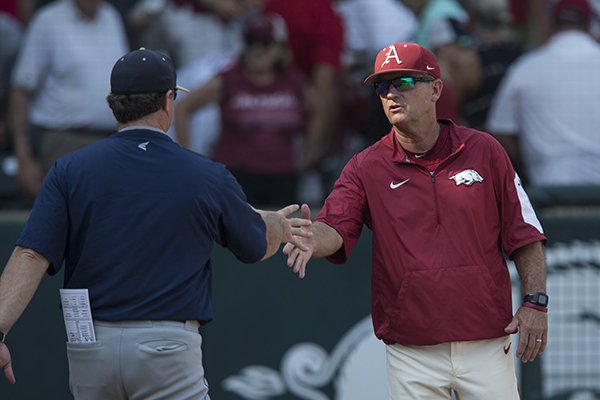 LAST MEETING Arkansas defeated Oral Roberts 10-2 in the opening game of the NCAA Fayetteville Regional on June 1, 2018, in Fayetteville.

TELEVISION The game will air on SEC Network-Plus and can be accessed on the ESPN app and ESPN3.com. (Carrier login required).

WEATHER According to the National Weather Service, the high temperature in Fayetteville on Tuesday is 82 degrees. Nighttime conditions are mostly clear with a low of 59.

NOTABLE Arkansas enters the game on a three-game losing streak at home, its longest such streak since 2016….Former Arkansas infielder Hunter Wilson transferred to ORU for his final season. Wilson is batting .304 with 18 RBI in 25 games. Wilson also has drawn 11 walks and has hit seven doubles and one home run. His on-base percentage is .374 and he is slugging .402….Arkansas and ORU are playing for the third consecutive season in Fayetteville. The Razorbacks have defeated the Golden Eagles in the opening game of regional play the past two seasons, and also defeated ORU in regional play in 2015. The teams last played in the regular season in 2012….ORU has won 18 consecutive regular-season championships in the Summit League, and 19 consecutive tournament championships….ORU has two Arkansans on its roster - junior left-handed pitcher Adam Scoggins of Springdale and junior outfielder Blake Hall of Magnolia.