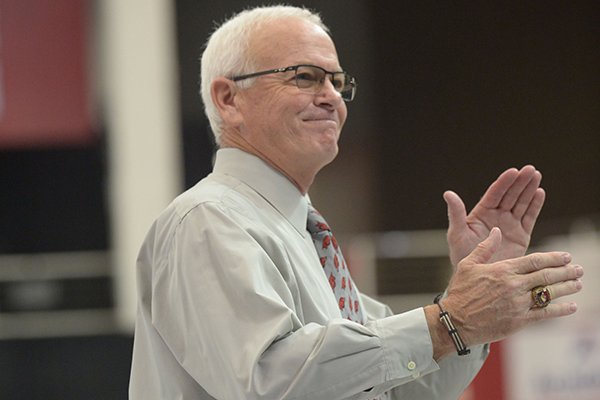 FAYETTEVILLE — Mark Cook, the Californian who became the co-founder of the University of Arkansas gymnastics program, announced his retirement Tuesday after 17 seasons with the Razorbacks.

Cook and his former wife, Rene Lyst, were hired to start the Arkansas gymnastics program in 2001, began competing in 2003 and quickly built a quality team that earned an NCAA regional berth in its second season and made its first NCAA championships appearance in 2009.

Cook, who was voted SEC coach of the year three times (2008, 2016, 2018), led the Razorbacks to 16 NCAA regionals, eight NCAA Championship appearances - including a surprise berth in 2018 - and two NCAA Super Six appearances. The Razorbacks had a top finish of fifth place in 2009 and were sixth in 2012.

“The University of Arkansas has been a part of my life for nearly two decades, and after much thought I have made the decision to retire as head gymnastics coach of the Razorbacks,” Cook said in a statement released by the UA.

“I want to express my sincere appreciation to former Chancellor John White and Bev Lewis granting me the opportunity in May 2001 to jumpstart a new gymnastics program in the Southeastern Conference. Most importantly, I want to thank the incredible coaches, support staff and families who gave their all for Arkansas Gymnastics every day over the past 17 years. It has been the opportunity of a lifetime to grow a program from infancy and see our student-athletes compete for and win individual conference and national championships at Arkansas.”

Cook shared head coaching duties with Rene Cook through the 2014 season and has been the solo head coach the past five years. The Razorbacks were 9-18 overall but winless in seven regular-season SEC meets this season. Arkansas finished fifth at the SEC championships.

“Few coaches have been more integral to the birth and growth of a program than Mark Cook has been for Razorback Gymnastics,” Arkansas Athletic Director Hunter Yurachek said in a statement. “Before there was a practice gym, student-athletes or the loyal gymnastics fans that follow our program today, Mark bought into a vision that the University of Arkansas could be home to nationally-competitive gymnastics program.

"Through his leadership, our program has produced national champions and competed annually in the NCAA Championships. We are grateful for Mark’s many contributions to our program and for his impact on the lives of the student-athletes he has coached at the University of Arkansas. We wish him the very best in his retirement.”