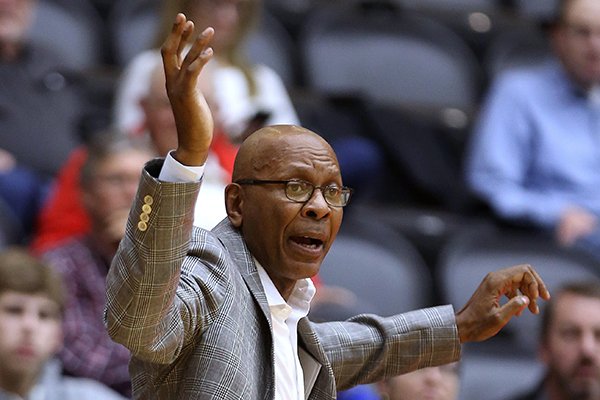 UALR head coach Darrell Walker calls a play during the second half of the Trojans' 77-73 loss on Saturday, Jan. 26, 2019, at the Jack Stephens Center in Little Rock.

FAYETTEVILLE -- Darrell Walker ran into Eric Musselman outside of the coaches' hotel at the Final Four on Saturday night in Minneapolis.

Walker turned out to be right on target.

By Sunday afternoon, Musselman was all over social media wearing a red Razorbacks shirt after his hiring was announced.

"It didn't shock me," Walker said. "We all knew he was in the mix for the Arkansas job."

Walker said he doesn't know Musselman well, but they've been around each other in previous years as NBA assistant coaches, and this season UALR played at Nevada.

The Wolf Pack, ranked No. 6 nationally at the time, beat the Trojans 87-59 at Lawlor Events Center in Reno, Nev., on Nov. 16. Nevada was led by seniors and twin brothers Caleb Martin (19 points) and Cody Martin (14 points, 10 assists), and senior Jordan Caroline (17 points, 12 rebounds).

"Eric had a team full of seniors," Walker said. "They were seasoned, and they were big at every position. They were really big at the guard spots. The guys that came off the bench were good players. He had a lot of high-level Division I players that had transferred in.

"What impressed me the most was the talent he had out on the floor. You don't win as much as he did if you don't have players, and he had a bunch of good players on the court -- guys that could potentially be NBA players. When you have that as a coach, you're going to have a chance to win."

Walker said he was impressed by Musselman's ability to attract good players to Nevada, where he had a 110-34 record and won three Mountain West Conference championships and played in three NCAA Tournaments. The Martin twins and Caroline were among several transfers on the Wolf Pack's roster.

"Nevada's nice, but it's not like it's one of the greatest destinations in the world for college basketball," Walker said. "A lot of coaches have done well there, but [Musselman] just took it to another level.

"He came in with a game plan of how he was going to build the program, and he did it. You can say what you want about transfers, but he got it done with those guys -- at a high level."

Musselman has extensive coaching experience in the professional ranks, including a combined three seasons as an NBA head coach with Golden State and Sacramento. He also has been an NBA assistant coach with Minnesota, Orlando, Atlanta and Memphis.

"He's an NBA guy, so he's definitely going to bring some NBA principles to Arkansas," Walker said. "But if you look at the college game, most teams are implementing NBA stuff now.

"He's proven that you can go from the pros to college and be successful. He's gotten it done."

Musselman's father, the late Bill Musselman, was an NBA and college coach.

"Eric's a basketball junkie," Walker said. "He's a hard worker and a guy that lives and breathes and eats and drinks basketball. Just like his father."

Walker said he's interested to see what Musselman can do at Arkansas.

"I think if you can win like he did at Nevada -- where the resources aren't as great as Arkansas' resources -- then he should have a good chance to win [with the Razorbacks]," Walker said. "Now, I've also got to say that Arkansas is in the SEC. That's a different monster. But he knows what it takes to win."

Musselman is replacing Mike Anderson, who was fired after eight seasons at Arkansas, where he had a 169-102 record with three NCAA Tournament appearances in 2015, 2017 and 2018, and NIT appearances in 2014 and this season.

In 17 seasons at Alabama-Birmingham, Missouri and Arkansas, Anderson has a 369-200 record with nine trips to the NCAA Tournament.

"I understand Arkansas people might think Mike didn't get it done, but he's a d*** good coach and I'd take his record any day," Walker said. "You look at what he's done over his whole career and it's pretty impressive. I'd take it in a heartbeat."