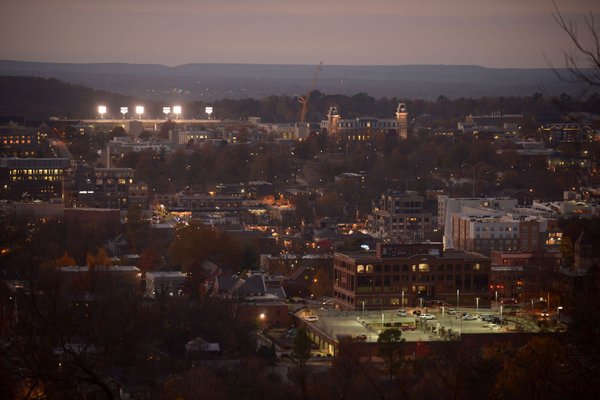 The sun sets over downtown Fayetteville and the University of Arkansas on Nov. 16, 2017.

Prospects reacted positively to Fayetteville being listed as one of the five best places to live in the nation by U.S. News & World Report for the fourth year in a row.

The latest rankings has Fayetteville the fourth-best place to live in the nation, No. 1 in the SEC and No. 2 among all Power 5 schools for the fourth consecutive year.

Cornerback Dwight McGlothern Jr., 6-2, 185 of Cedar Hill (Texas) Trinity Christian, is an ESPN 4-star prospect, the No. 8 cornerback and the No. 105 overall prospect in the nation. He was surprised to hear about Fayetteville being rated so highly.

“That’s crazy. I’ve thought it was probably College Station, but to me it’s even better in Arkansas,” McGlothern said.

The rankings were based on its value, desirability, job market strength, quality of life and other factors. Highly recruited four-star cornerback Jahari Rogers, 6-0, 168 pounds, 4.5 seconds in the 40-yard dash of Arlington, Texas, plans to officially visit Fayetteville on May 3-5.

“It’s really cool to know. It makes you want to visit it more,” Rogers said. “I can’t wait for my official visit just to see for myself how special the place is.”

Quarterback Mike Wright, 6-4, 180, 4.52 seconds in the 40-yard dash of Atlanta's Woodward Academy, has scholarship offers from schools such as Arkansas, Ole Miss, Minnesota, Louisville, Kentucky, Illinois and others.

“Wow, I didn't know all of that was in Fayetteville,” said Wright, who plans to visit Arkansas this summer. “It’s actually very intriguing. The main part of college is to set yourself up for after school.”

“I think it’s awesome for sure, and definitely something to look at when making a decision,” said Yelverton, who visited the Razorbacks on March 9.

Running back Frank Brown, 6-1, 175 of Houston Sterling, was intrigued by the the rankings and Fayetteville’s reputation.

“That says a lot about the city,” Brown said. “You know, it definitely would help recruits when making their decisions on where to sign. It also influences a lot of people to come and visit there. Just, you know, check the place out.”