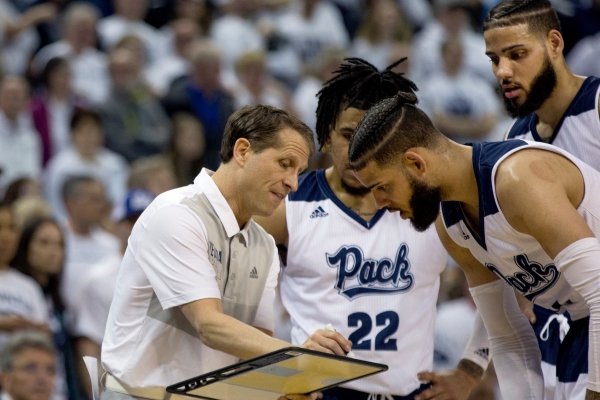 Since Eric Musselman's hiring at Arkansas became clear on Sunday, we've covered and learned of his extensive background in professional basketball, which included a pair of head coaching stops in the NBA with the Golden State Warriors and Sacramento Kings.

It's evident that his time as an assistant and head coach in the NBA helped mold and shape his Pace and Space offensive philosophy. He was able to learn from and pick the brains of a number of the game's great minds like the late Chuck Daly, a master at getting along with players, Musselman said, and Doc Rivers, a pro at pregame motivation.

Serving on his father's bench in Minnesota even provided him the opportunity to form ideas and decide what intricacies he did and didn't want to incorporate in his own system down the line. Musselman said Monday that his father, Bill, placed an emphasis on defense and brought the game to a halt on the other end.

The younger Musselman found himself yawning on the sidelines at times, he joked. There's nothing boring about Musselman's offense at the college level. His four Nevada teams averaged between 69-71 possessions per game on average and finished in the top 40 nationally in offensive efficiency in his final three seasons.

In 2017-18, the season Nevada made a run to the Sweet 16 by beating Texas then upsetting Cincinnati after trailing by 22 points in the second half, the Wolf Pack scored 120.2 points per 100 possessions, which placed them in elite company. Only Duke, North Carolina, Kansas, Villanova, Purdue and Wichita State scored more efficiently that season.

The last two seasons, Musselman's teams featured a host of talented players such as Caleb and Cody Martin, Jordan Caroline, Jazz Johnson, Tre'Shawn Thurman and Kendall Stephens. Those players and his system were a perfect fit. The offensive numbers and win total - 58 in two seasons - back that up.

This particular play intrigued me because of all the options it presents. It begins with the ballhandler, typically one of the Martin twins, on the right wing and the other a step or two off the right block. The first read is the post-up opportunity, but if the ballhandler doesn't like what he sees, then the post-up becomes a peel off and the player runs off three screens on the opposite side of the floor prior to setting a ghost screen for the on-ball guard and resetting on the right wing.

If Red creates enough space off the stagger screen, he could let a 3 fly, but if not, Black is shooting to the 3-point line off Blue's screen. The first time I saw Nevada run this set against Utah State, Black got off a 3. In another instance, Black couldn't get a shot off and dumped down to Blue on the left block. If nothing else, the ball can also be reversed and Orange has the right side of the floor to himself for a possible iso.

Late in the first half against San Diego State in this year's Mountain West Conference Tournament semifinals, Musselman called for this set. I liked the looks of it because it featured his best player - Caleb Martin - in double high ballscreen action with options to shoot the 3, get to the rim, find a teammate in the paint or cutting backdoor. One screener finds the left wing and the other dives to the middle of the lane as Martin dribbles right.

Also, the teammate set up in the right corner is reading his defender as Martin comes right and has the option to cut baseline for a potential layup. If Martin drives, though, he can camp out and await a pass for a corner 3 - one of the most efficient shots in the game. No matter what, after the initial ballscreens, the floor is well-spaced, which is optimal.

Baseline out of bounds

Something I picked up on pretty quick when watching past Nevada games is Musselman liked ultimately getting the ball back into the hands of the player inbounding the ball. I guess, though, when that player in Caleb Martin it makes a lot of sense. Martin inbounds to the corner, then runs off a screen and up the lane line to catch at the top of the key and eventually uses a ballscreen from the player who initially sets up on the block closest to the baseline. The screener pops to the perimeter and Martin has the option to hit him, shoot the 3, a midrange jumper or attack the left side of the floor.

This play has Mason Jones written all over it, I think.

This is a pretty standard potential quick hitter for a corner 3. If the shot isn't there then the guard can simply pull out of the corner and transition into another halfcourt set.

I enjoy seeing what a coach draws up on his whiteboard during a timeout come to life moments later. This is an interesting setup and options are plenty. There’s a small chance Blue breaks free for an easy score, and Black could launch a midrange jumper if his man gets caught up in the stagger. But, in the game I pulled this play from, Black caught and dribbled out to the right wing and waited for the inbounder to come off two screens and reach the foul line before finding him. Blue will clear out to the left corner and, again, the ballhandler can utilize space and attack left or let the 3 fly. The ball is in the hands of your best player in the middle of the floor and he has options. I like this.

This is a dribble handoff at the top of the key after the inbounder runs off a screen from a teammate on the left block. If Blue’s screen is solid, the inbounder can then race to the ball and put the defense in a bind by attacking space or penetrating and kicking to Red for a corner 3. The pick-and-pop may also be available.

Sideline out of bounds

By the looks of it, this play could be used in a traditional sense or in late-game situations. In a late-game setting, Blue is sprinting to the open space in front of the inbounder and Black releases more toward midcourt. Ideally, those two players would be your top free throw shooters.

Or, for example, if the ball is knocked out along the sideline, this design is great, I think, for getting the ball in one of your guards’ hands (Black), letting him come off a pair of screens and gain momentum to attack the defense prior to even reaching the 3-point line. Should he attack the lane, the forwards have their defensive matchups somewhat drawn to the perimeter and therefore are less of a threat in terms of rim protection.