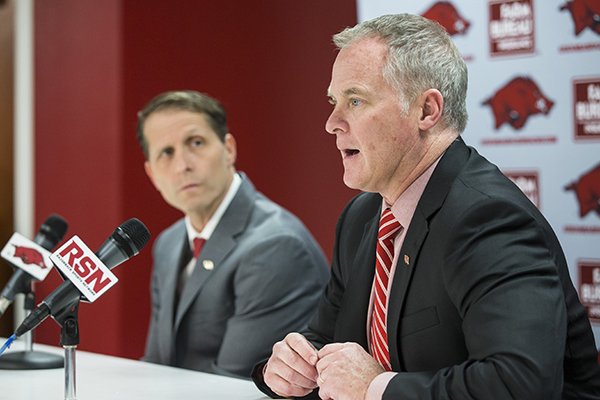 Hard-core Razorback fans will find it hard to imagine, but there are Arkansans who, upon hearing names like Chad Morris, Dave Van Horn, Hunter Yurachek and now Eric Musselman, will respond by asking, “Who?”

Heck, there are people on the University of Arkansas campus who will respond that way.

So it’s not surprising these folks don’t quite get it when their cardinal-wearing, Hog-calling neighbors lose their ever-lovin’ minds over who will be hired, and for how many millions, to teach 15 of the 27,000 students on campus the most effective strategy and skills to put an orange ball through a net suspended 10 feet above a hardwood floor.

Well, when you put it that way …

Arkansas has just completed a process more secretive than selection of a new Pope and more capable of producing gossip, unfounded tweets and speculation than any morning at the White House. It’s known as a college coaching search.

You’d think we’d feel differently. The firing of one coach and the high level of interest in his replacement naturally draws readers to the newspaper and its coverage online. We do like that.

People actually track the tail numbers of private airplanes criss-crossing the country as they try to pick up any nugget of information about where an athletic director has landed and, by extension, which coaching prospects might have been nearby enough to be a potential hire.

Critics complain the search has dragged on, casting all sorts of blame and analysis of what any delay means about who turned down an offer or who used the situation to get a big, new contract at his current school. People assert the decision is critically important, yet they’re unnerved if it doesn’t come in the first 15 minutes after the previous coach was fired.

Some rabid fans talk as though Coach K at Duke is waiting by the phone and they’re baffled as to why other elite coaches aren’t lined up asking to speak to the coach-seeking athletic director.

It’s easy for people’s expectations to get out of whack.

Coaching searches also draw media outlets into the frenzy as they toss standard reporting protocols out the window. In the Arkansas search, athletic director Yurachek kept any comments or detail so close to his vest, all that remained was the speculation, including erroneous information (“Musselman is on campus!”) that spreads like wildfire through social media.

Is the coaching choice really that important?

In a word, yes. People ultimately get to choose what they want to care about, and collegiate athletics is built for passion. It also helps that nobody’s talking life-and-death issues. It’s not war or famine or nuclear tensions. People can be excessively exuberant and the most serious outcome will be a win or a loss. It’s an escape.

From our perspective, Yurachek did what he’s employed to do: He found a talented coach and made sure it’s someone who, along with his family, wants to be in Fayetteville, wants to get to know this great state and wants to become one of its most visible ambassadors.

We wish for their success, because the young players at an SEC university deserve to live out their dreams, and fans deserve a program they can be proud to cheer for.

And, yes, we wish for success for one more reason: So the Arkansas Razorbacks and their fans won’t have to go through another coaching search for a long, long time.