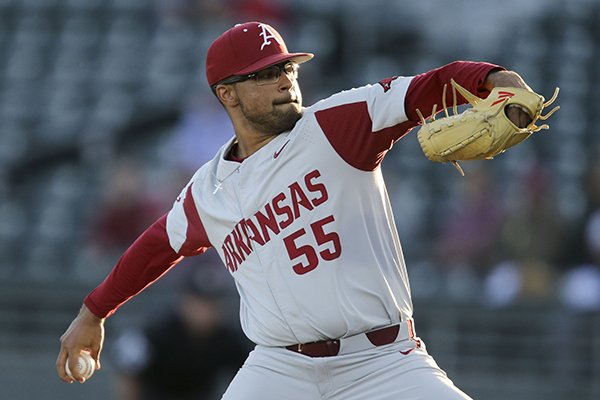 Tyler Brown made Arkansas' hitters look silly after he came into the game in the eighth. He struck out Christian Franklin and Trevor Ezell to start the ninth, then got ahead of Heston Kjerstad 0-2 before Kjerstad fouled out to end the game.

Brown earned his seventh save.

Drake Fellows improved to 7-0 with a quality seven-inning start. Isaiah Campbell took a loss, the first Friday starter to lose a game for the Razorbacks in nearly two years. Campbell struck out nine and didn't walk anyone in 7 2/3 innings.

Arkansas outhit Vanderbilt 7-6, but the Razorbacks stranded nine base runners.

Kevin Kopps struck out JJ Bleday in four pitches, the final of which was his signature 1-2 cutter that Bleday chased low in the zone.

Arkansas will send Christian Franklin, Trevor Ezell and Hesotn Kjerstad to the plate in the ninth.

Isaiah Campbell's night is finished after he gave up a two-out double to Austin Martin in the eighth inning. Campbell threw 98 pitches. He struck out nine, allowed six hits and did not walk any batters. He is in line for his first loss.

Kevin Kopps is in the game looking to keep the Razorbacks within one run going to the ninth. He will face the SEC's home run leader, JJ Bleday.

Jacob Nesbit hit into an RBI groundout against right hander Tyler Brown, but runners were stranded at second and third when Casey Opitz looked at a borderline 1-2 pitch that was called a third strike. Brown froze him with a 96 mph fastball on the inside corner.

The top of the Razorbacks' order will come to the plate in the ninth. Isaiah Campbell must face the top of the Vandy order for the fourth time in the bottom of the eighth.

Dominic Fletcher was hit by a pitch and Matt Goodheart and Jack Kenley followed with walks. The Razorbacks have the bases loaded with one out against Vandy left hander Zach King, who is being replaced. King threw 18 pitches, including 12 for balls.

Some of our previous updates have vanished. Sorry for the confusion.

Vanderbilt leads 3-1 after seven innings. Isaiah Campbell worked a quick bottom of the seventh for the Razorbacks, capped by a nice sliding catch by Christian Franklin.

Arkansas' last best hope might be the eighth in which Casey Martin, Dominic Fletcher and Matt Goodheart are due up.

Austin Martin led off the bottom of the inning with a triple to right field and scored on JJ Bleday's sacrifice fly.

Matt Goodheart might have cost Arkansas a run with a base-running error in the top of the sixth. Jack Kenley followed with an infield single to the left side, which forced Goodheart to stay at second.

Jacob Nesbit hit to the left side again in the next at-bat, but Goodheart appeared to freeze, creating an easy out at third base. Had he been running, the only play might have been at first base, which would have put two runners in scoring position.

As it was, Casey Opitz followed with an inning-ending double play ground out. The Razorbacks have stranded six runners tonight.

Isaiah Campbell had an easy 1-2-3 inning in the fifth. All three outs were on contact and Campbell only had to throw eight pitches.

The Razorbacks nearly put together a weird two-out rally. Heston Kjerstad surprised everyone with a two-strike bunt single and Casey Martin followed with a soft blooper that fell in front of second baseman Harrison Ray.

The half inning ended when Dominic Fletcher grounded out to strand two. The Razorbacks have stranded six tonight.

Isaiah Campbell got Harrison Ray to strike out and Stephen Scott to ground out to strand one base runner. Campbell has struck out six through four innings, and his pitch count is still relatively OK at 54 - 40 for strikes.

The meat of the Vanderbilt lineup has struck in the fourth. The Commodores 3-4-5 hitters - JJ Bleday, Ethan Paul and Philip Clarke - recorded hits, the latter of two of which were RBI doubles.

Paul's double was to left field. Christian Franklin dove for the ball and it got past him to the wall, allowing Bleday to score easily from first base. Clarke's double went down the first-base line and past Trevor Ezell.

This game is flying by. Vanderbilt recorded its first hit of the game with two outs in the third, but Cooper Davis, the Commodores' leadoff hitter, flied out to end the inning. Arkansas' 1-2-3 hitters went down in order in the top of the third.

Isaiah Campbell has five strikeouts on just 35 pitches. Vandy's Drake Fellows has six strikeouts, but his pitch count is a little higher at 47.

Isaiah Campbell struck out two more in the second, but Ethan Paul reached to lead off the inning because of a wild pitch on strike three. The big play in the inning was a 3-6-1 double play ground out by Philip Clarke.

Jack Kenley singled with one out, advanced on a groundout and scored on Casey Opitz's two-out RBI single to put the Razorbacks on the scoreboard first.

Isaiah Campbell looked sharp in the bottom of the first inning, striking out Austin Martin and JJ Bleday in consecutive at-bats to end the inning. Campbell only threw 15 pitches in the inning.

Arkansas couldn't do anything with a two-out single by Casey Martin in the top of the inning. Martin's hit was sandwiched between a couple of swinging strikeouts by Heston Kjerstad and Dominic Fletcher against Vandy starter Drake Fellows.

It is a cloudy night in Nashville, but the rain should hold off long enough for the teams to play tonight's game.

Mid-season rankings don't always mean much, but this appears to be a big series that could go a long toward these teams' chances at hosting a regional later this year. Vanderbilt is ranked second nationally in RPI entering the series; Arkansas is fourth.

The series also figures to have implications at the top of the leaderboard in the SEC's two divisions. Arkansas is in a three-way tie for first place in the SEC West, while Vanderbilt is second in the SEC East.

The pitching matchup tonight is between a pair of unbeaten junior right handers. Vanderbilt's Drake Fellows is 6-0 with a 3.44 ERA, while Arkansas' Isaiah Campbell is 6-0 with a 2.29 ERA.

Campbell has pitched well all season, but took a no-decision last week at Auburn when the Tigers scored three times in the sixth inning to tie the game. Prior to that Campbell had been almost untouchable, pitching to contact and keeping his pitch count low.

Campbell doesn't walk a lot of batters, but his strikeout totals have fallen off in recent weeks. He had three consecutive games with 10 or more strikeouts in March.

Fellows is a little more of a power pitcher and has a slightly higher strikeout-per-nine-inning rate with 58 strikeouts through 49 2/3 innings. But Fellows has struggled some with command this year and has issued 22 walks.

Several of the SEC's best hitters are in this series. Vanderbilt has five starters batting .320 or higher, including four in the top 13 in the conference in batting average. The Commodores also boast the SEC's top home run hitter, JJ Bleday (14).

Arkansas' Heston Kjerstad is fourth in the league with nine home runs, including four over his past four games.