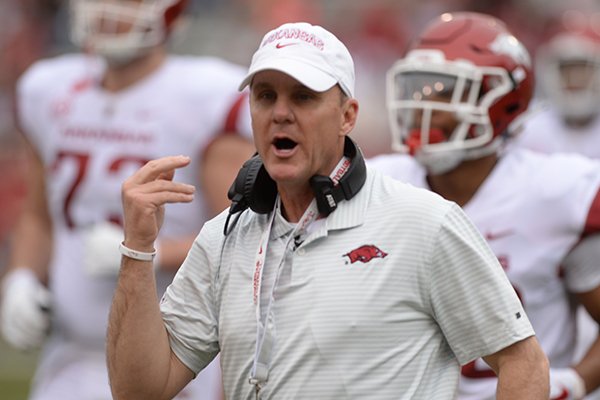 Arkansas coach Chad Morris speaks to members of his offense Saturday, April 6, 2019, during the Razorbacks' spring game in Razorback Stadium in Fayetteville.

University of Arkansas Coach Chad Morris and his staff are expected to host three targets for official visitors this weekend in hopes of convincing them to be Razorbacks.

Horace has scholarship offers from Arkansas, Nebraska, Baylor, Oklahoma State, Texas Tech and Baylor. He made an unofficial visit to Fayetteville on March 9 and looking forward to see if Arkansas is the place for him.

"Really just to see if Arkansas is what I'm fixing to call home for the next three to five years of my life," Horace said.

Horace, who hasn't set other official visits yet, said what might convince to pick the Hogs during the trip.

"The atmosphere on campus [and the] people I'm going to be around," Horace said. "The relationship with my family and the coaches."

He along with his parents and brother are expected to arrive in Fayetteville early this afternoon. Associate head coach and running backs coach Jeff Traylor and tight ends coach Barry Lunney Jr. are recruiting Horace.

"Those are my guys," he said. "Both guys always looking out for me and keeping a good line of communication. I feel like no matter what, we could always be tight."

The trip to Fayetteville will be his fourth since getting the offer from the Hogs. Crawford is looking to learn more about Arkansas.

"I just wanna become closer to the school," said Crawford, who has the Hogs as his leader, said. "I just wanna experience something I haven't experienced all ready."

Crawford is fond of offensive line coach Dustin Fry and Traylor, who recruits east Texas. He likes being recruited by someone like Traylor because of his ties to east the area.

"Can't really explain it, all I can say is 903 east Texas, Beast Texas," Crawford said.

His teammate and Razorback running back target Kelvontay Dixon made an official visit to Arkansas last weekend. Crawford is in Dixon's ear about Arkansas.

"I was just telling him the same thing Traylor told me, I told him that East Texas boys need to take over," Crawford said.

Richardson made an unofficial visit to Arkansas on March 9. He had 189 carries for 2,135 rushing yards and 26 touchdowns as sophomore despite missing four games with a broken ankle. He followed up with more than 1,500 yards and 20 touchdowns as a junior.

He has offers from Arkansas, Missouri, Nebraska, TCU, Colorado, Iowa State, Minnesota, Memphis and others.

Moody, 6-6, 192 of Montverde Academy in Florida, is an ESPN 5-star prospect, No. 8 shooting guard and No. 26 overall recruit in the nation for the 2020 class. He played at North Little Rock as sophomore and Little Rock Parkview before that.