Razorbacks target Williams looks to take flight at The Warmup 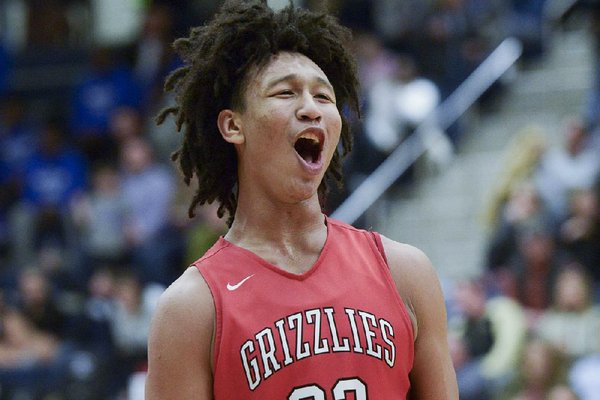 Fort Smith Northside’s Jaylin Williams is averaging 15.4 points and 10 rebounds this season. The Grizzlies will take on Bryant in the Class 6A boys state championship game Friday in Hot Springs.

FAYETTEVILLE — This could be the biggest spring and summer of young Jaylin Williams’ basketball life.

Williams (6-10, 220), one of the state's most-improved players who led Fort Smith Northside to a Class 6A state title in March, will be in Fayetteville and Springdale this weekend with his Arkansas Woodz Elite AAU squad.

The junior big man will be manning the center spot for Woodz Elite at Fayetteville High on Friday as it begins action in the The Warmup with a 7:45 p.m. showcase game against Bradley Beal Elite and former North Little Rock star Moses Moody.

“I’m excited about getting up there this week,” Williams said. “I think we have a great group of guys on our team.”

Williams has been assured by new Razorbacks coach Eric Musselman that the offer he received from the former staff has carried over.

Musselman called Williams’ father earlier this week to clarify the offer stands for the prospect who also holds offers from Oklahoma State, TCU, Tulsa and Lamar.

“It is good to hear about all the experience he (Musselman) had coming into this,” Williams said. “We’ll see how it goes down up there, but I am certainly interested in what’s going on.”

While intrigued with Musselman’s hire, Williams, who averaged 16 points, 11 rebounds and three blocks as a junior, was also sad to see former coach Mike Anderson let go after eight years at the helm of the Razorbacks.

“I wasn’t expecting it,” Williams said. “Obviously I had heard talk of it and I was really hoping it would not happen because I had such a great bond with Coach Anderson, Coach Watkins and all of them up there. I really just, I don’t know, I just think it was a bad decision.”

After playing with the Joe Johnson Arkasas Hawks last year, Williams joined Woodz Elite this spring and got in his first action with his new team in last weekend’s Real Deal in the Rock.

“We played good and I think we beat every team by at least 20 points,” Williams said. “We had a lot of good chemistry developing over those games. We have a lot of great athletes on the team.”

Williams, who has 3-point range as well as an interior game, will work in the frontcourt with Moore.

“He is a great athlete that jumps really high, is always above the rim and is always in the middle of things,” Williams said. “He is a workhorse. If you give him the ball, you can almost be guaranteed a bucket.”

Williams is ranked as a three-star prospect, but that might change as he gets more exposure while playing for the Woodz Elite on the Nike EYBL circuit.

“I’m just working hard to become the best player I can be, but I do think I have a chance to get seen more this year,” Williams said.

Williams was consistent throughout Northside’s season, but saved his best for the last game of the regular season and a four-game run to the state championship.

He poured in a season-high 35 points as Northside downed arch-rival Fort Smith Southside before taking it up a notch and being named MVP as Northside took down Bryant in the title game.

Williams finished with 20 points, 16 rebounds and 3 blocks in the finals as Northside (21-11) won its second title in three years by downing Bryant 44-41.

“I feel like we were clicking throughout the end of the year and the tournament, my teammates were knocking down outside shots…I felt like when we were clicking like that no one could stop us and we ended up proving that.”

That postseason run came despite Williams picking up two fouls against host Bentonville West in the first game in the first couple of minutes.

“We were counted out from the very beginning and we knew we were going to have to get through three hard games to get to the state finals,” Williams said. “I picked up those two fouls in the first game and then we knew it was going to really be a struggle, especially since we were at their home place and so we had the crowd against us and we felt like the refs were against us.

“But we stayed calm, put it together and just kept moving forward and doing what we needed to do to meet each challenge.”