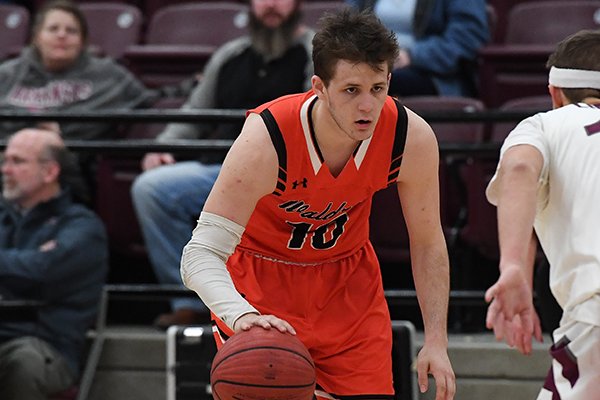 Waldron guard Payton Brown dribbles during a game against Lincoln on Tuesday, Jan. 29, 2019, in Lincoln.

FAYETTEVILLE — Waldron shooting guard Payton Brown might not be the most athletic player in the state, but he is arguably the most productive offensively.

Brown (6-3, 185), who is committed to the University of Central Arkansas, averaged 32 points per game this past season, including 50 of his team’s 72 points in a Class 3A first-round state tournament loss.

The pure-shooting Brown, whose 1,057 points this season was the sixth-best, single-season total in state history, will play this weekend in Fayetteville and Springdale as his Arkansas Woodz Elite AAU squad takes part in The Warmup.

“I am blessed to be able to play with a lot of talented guys, the highest caliber of players in Arkansas and some of the best around the country,” Brown said. “Just being able to compete against them in practice makes me a better player and I just try to do what I can to help us win.”

Brown, who also averaged 6.1 rebounds, 2.8 steals and 2.1 assists per game as a junior, was 12-of-20 from 3-point range and averaged 17 points per game in Woodz Elite’s games at the Real Deal in the Rock last weekend.

“I want to lead the (Nike) EYBL in 3-point shooting this summer,” Brown said.

Williams is a big fan of Brown, who averaged 32.5 points per game as a sophomore.

“Payton is a great shooter and if you get him the ball out for a 3, it is almost automatically going in unless he gets fouled,” Williams said. “Every time he put up a shot, it was going in.”

Woodz Elite will also play pool games on Saturday at Springdale Parks and Rec (the building formerly known as Next Level) at 11:30 a.m. and 3:15 p.m. as well as Sunday morning at 9:15 a.m. at the same venue.

“I know he is a great coach and knows what he is doing,” Brown said.

Brown is happy to be a future Bear.

“I am committed to UCA 100 percent and very happy about that, but you are always going to look at options,” Brown said. “I am just going to go out there and play my game and whatever happens.”

Brown, whose career-high of 56 points is two shy of his dad John’s school record, helped lead Waldron to a 23-10 mark this season.

“We played really well as a team this year and accomplished the goals that we set,” Brown said. “We won the most games in program history this year with 23 wins and we have everybody returning for next season, so we are excited about that.

“I am looking forward to next year and what we can do and if we keep our team chemistry like we had it this year we should be really good.”