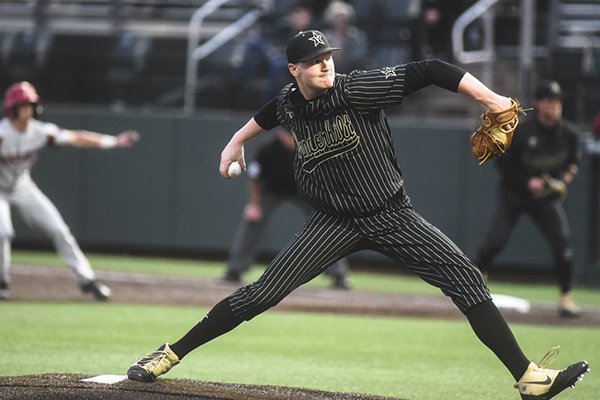 Vanderbilt pitcher Drake Fellows throws during a game against Arkansas on Friday, April 12, 2019, in Nashville, Tenn.

Vanderbilt right-hander Drake Fellows out-dueled University of Arkansas ace Isaiah Campbell as the No. 7 Commodores opened a marquee series with a 3-2 victory over the No. 10 Razorbacks on Friday.

The Commodores (26-8, 8-5 SEC) ended a long run without a loss by Arkansas weekend-opening starters before a crowd of 3,465 at Hawkins Field.

Vanderbilt increased its home winning streak over the Razorbacks (25-9, 8-5 SEC) to four consecutive games, improved to 19-3 at home and pulled within a half game of SEC East leader Georgia. Arkansas dropped out of a tie atop the SEC West.

Fellows (7-0) threw 107 pitches in seven strong innings. The 6-5 right-hander scattered 7 hits and 2 walks and allowed 1 earned run while striking out 9.

"I actually felt really good in the pen," Fellows said. "This week, leading up, I was just trying to stay consistent and fix a couple of things mechanically. You always want to get better each week and keep working. It felt good throughout the week and good in the pen, and I was ready to go."

The loss by Campbell was the first by an Arkansas starter in a weekend-opening game in nearly two years. The last instance came when Ole Miss hung a loss on Blaine Knight in a 9-1 victory on April 27, 2017.

The teams will match up again Saturday at noon, rather than the original start time of 8 p.m., because rain is in the forecast in Nashville, Tenn., tonight. The game will not be broadcast on ESPNU as originally scheduled, but will be available streaming on WatchESPN.com and SEC Network-Plus.

The Razorbacks stranded nine runners to Vanderbilt’s three and could not fully capitalize on a big scoring chance in the eighth inning against the Commodores’ bullpen.

Trailing 3-1, Arkansas loaded the bases against lefty reliever Zach King with one out in the eighth when Dominic Fletcher was hit by a pitch, then Matt Goodheart and Jack Kenley drew consecutive walks.

Tyler Brown relieved and was greeted by Jacob Nesbit’s RBI grounder to first as Arkansas pulled within 3-2, but Brown struck out Casey Opitz and worked a perfect ninth to post his seventh save.

"We had a couple of opportunities ... where we just needed a big hit," Arkansas Coach Dave Van Horn said. "We had the bases-loaded and one out down two and we hit a ball off the end of the bat, and then we have a called third strike."

The Razorbacks hopped on top with a lone run in the second inning after Kenley got on board with a one-out single to left field. With a hit-and-run on, Nesbit grounded out to shortstop and Ethan Paul’s only play was to first base.

Opitz hit a ball up the middle, just out of reach of Fellows and second baseman Harrison Ray to score Kenley and give Arkansas a 1-0 lead.

"We got a big hit from Opitz with two outs, but other than that we didn't hit with runners in scoring position," Van Horn said.

Arkansas held the lead until the bottom of the fourth inning. J.J. Bleday, the SEC home run leader, singled to right on a full-count pitch with one out. Paul followed with a shot near the left-field line that got just under the glove of the diving Christian Franklin and rolled to the wall for an RBI double.

Philip Clarke then drilled a ball just inside the first base bag that rolled toward the tight right-field corner for an RBI double and a 2-1 Vanderbilt lead. Campbell got out of the inning without further damage by retiring Ray on a check-swing strikeout and getting a grounder to second from Stephen Scott.

Arkansas left two runners on base in both the fourth and fifth innings. Fellows walked Kenley and Nesbit with two outs in the fourth but struck out Opitz to get out of the inning.

With two outs In the fifth, Heston Kjerstad got on with a bunt single to shortstop, then Casey Martin reached when the second baseman Ray could not field his shallow pop up for a single. Fletcher grounded out to second base to end the half inning.

Fellows made some of his best pitches to escape a jam in the sixth after Goodheart led off with a double off the left-field wall. Kenley singled to deep shortstop but Goodheart could not move up on the play. Nesbit’s ground ball to Paul led to a force out at third base, then Opitz smacked a hard-hit grounder to Ray that he turned into a double play.

The Commodores extended their lead to 3-1 in the sixth when Austin Martin’s blooper hit the right-field line for a triple and he scored on Bleday’s sacrifice fly.

Arkansas outfielders Kjerstad and Franklin both made diving catches in the top of the seventh inning. Kjerstad came up quickly in right field and made a sliding catch to retire Ray on a shallow fly for the first out of the inning. Franklin dove head first in the left-center gap to pluck a sinking liner from Ty Duvall just off the field turf for the final out of the inning.