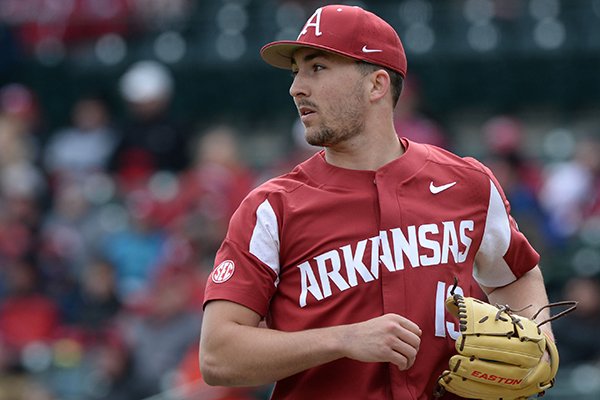 Arkansas starter Connor Noland backs up third as Ole Miss scores a run Saturday, March 30, 2019, on a single by third baseman Tyler Keenan during the third inning at Baum-Walker Stadium in Fayetteville.

No. 7 Vanderbilt scored seven runs before recording an out and easily defeated No. 10 Arkansas 12-2 on Saturday to win the best-of-three series at Hawkins Field.

Arkansas starting pitcher Connor Noland faced five batters without recording an out in the bottom of the first inning, and reliever Kole Ramage gave up a grand slam to Stephen Scott to cap the Commodores' seven-run inning. Vanderbilt sent 10 batters to the plate in the inning and eight reached base.

"We had a reliever getting hot because Connor is a freshman and he still hasn't proved to us he can get out of a jam," Arkansas coach Dave Van Horn said. "The game was still within reach...and we didn't have an out yet."

The inning included a number of errors or mental mistakes by Arkansas players. Shortstop Casey Martin had a throwing error, and he and left fielder Christian Franklin collided on a fly ball that resulted in a single and a run. Noland was pulled after he was late covering first base on a grounder hit to first baseman Trevor Ezell, resulting in another single.

The Commodores added two runs on RBI hits by Ethan Paul and Philip Clarke in the second inning, and Ramage allowed three straight two-out hits, including a three-run home run to JJ Bleday, in the third. The homer was Bleday's SEC-leading 15th this season.

"The game was already decided and there wasn't a lot on the line, but you still take your hat off to the young (relievers)," Van Horn said. "They came in and threw the ball over the plate and competed hard, and got us through the rest of the game without having to go to some older kids."

Arkansas (25-10, 8-6) had only one hit through four innings against Vanderbilt freshman right hander Kumar Rocker, who pitched seven innings and struck out seven batters without recording a walk.

The Razorbacks' lone offensive highlight was the play of designated hitter Matt Goodheart, who was 3-for-3 with a walk. Goodheart had two doubles against Rocker.

Arkansas scored twice in the eighth inning to avoid its second shutout loss of the season. Jacob Nesbit led off the inning with a double and scored on a throwing error by Paul, the Vanderbilt shortstop. Plunkett scored later in the inning on an RBI single by Heston Kjerstad.

Vanderbilt outhit Arkansas 12-7 and both teams committed one error. The Razorbacks stranded five base runners and have stranded 14 over the first two games of the series.

Matt Goodheart walked in the ninth inning to finish his day 3-for-3. He was about the only bright spot, though, for the Razorbacks, who were soundly beaten and dropped their first road series. Arkansas will look to avoid the series sweep tomorrow at 1 p.m., weather permitting.

Liam Henry had two strikeouts and worked around a couple of two-out walks in the eighth. He, Elijah Trest and Marshall Denton did a nice job of limiting the damage after a horrible first few innings for Arkansas pitching.

Heston Kjerstad hit an RBI single to score Zack Plunkett from third base with two outs. Casey Martin followed with a strikeout to end the inning and strand one base runner. Arkansas has stranded four today and 13 for the series.

Arkansas will avoid the shutout. Jacob Nesbit doubled to lead off the eighth and scored when Vanderbilt threw into the dugout trying to throw out Zack Plunkett on a ground ball to shortstop. Plunkett advanced to second base.

Ethan Smith replaced Kumar Rocker on the mound prior to the inning. Rocker is in line for a quality win.

Marshall Denton retired all three Vanderbilt batters he faced in the seventh. The Razorbacks have retired six straight batters and eight of the last nine.

Arkansas coaches have to be pleased with the outing by Elijah Trest, who also pitched well in his last conference outing against Ole Miss a couple of weeks ago. Trest pitched three innings today and allowed one hit and two walks. He struck out one. He seems to have progressed well the past few weeks.

Matt Goodheart continues to be a bright spot but he isn't getting any production around him. Goodheart doubled with two outs in the seventh and is 3-for-3 today. The inning ended when Jack Kenley flied out to center field.

Kumar Rocker has allowed four hits and struck out seven without a walk through seven innings.

The Razorbacks are making more lineup changes. Curtis Washington Jr. has replaced Christian Franklin, but struck out on a pitch that looked below the knees in the sixth.

Jordan McFarland hit an infield single in the inning for the Razorbacks' third hit, but Heston Kjerstad flied out to end the half inning.

Kumar Rocker continues to roll for the Commodores. His pitch count is only 71 and it's not inconceivable that he could go the distance.

Elijah Trest allowed a single and hit a batter with one out in the inning. He stranded runners on the corners when Ethan Paul flied out to left field.

Matt Goodheart doubled with one out but was stranded at third base when Jacob Nesbit struck out against Kumar Rocker to end the inning. Rocker has five strikeouts and has only had to throw 56 pitches in five innings.

Goodheart has both of Arkansas' hits.

Arkansas is playing for tomorrow. The Razorbacks took out pitcher Kole Ramage and catcher Casey Opitz in the fourth, replacing them with Elijah Trest on the mound and Zack Plunkett behind the plate. Jordan McFarland also replaced Trevor Ezell at first base.

Trest worked around a leadoff walk in the bottom of the inning. Dominic Fletcher made a good diving catch in center field for the second out.

The top of the Arkansas order went down 1-2-3 in the top of the inning. The Razorbacks still have only one hit, a single by Matt Goodheart in the second.

Arkansas' offense isn't doing anything against Vanderbilt freshman Kumar Rocker, who has faced the minimum through three innings. The Razorbacks have one hit, but it was erased by a double play.

Ramage struck out Harrison Ray and Stephen Scott in consecutive at-bats to get out of the inning and strand a runner at third base. Chances are Ramage will throw until he runs out of gas today in order to preserve arms for tomorrow.

The Commodores sent 10 to the plate in the inning, which ended on a 4-6-3 double play. Eight of Vanderbilt's nine hitters reached base in the inning.

This one has the potential to be really ugly for the Razorbacks. Kole Ramage walked in a run and Stephen Scott followed with a grand slam to left field. There are still no outs in the inning.

Nothing has gone Arkansas' way in the bottom of the first and Connor Noland has already been pulled after throwing just 15 pitches.

There has been a throwing error, a collision between fielders and an infield single in which Noland was slow to cover the base at first. The first five Commodores have reached and Kole Ramage is inheriting the bases loaded with nobody out.

The Razorbacks went down in order in the top of the first. Trevor Ezell tried to bunt with two strikes against the Vanderbilt shift, but fouled it off for the first out. Heston Kjerstad and Casey Martin both flied out.

The pitching matchup today is between freshmen, just like the past two weeks against Ole Miss and Auburn.

Vanderbilt freshman right hander Kumar Rocker has been inconsistent this year, but projects well and has a fastball in the mid 90s. Rocker is the son of Tracy Rocker, the former Outland Trophy winner and a former assistant football coach at Arkansas.

Connor Noland is starting for the ninth consecutive weekend and still looking for his first win. Noland pitched well at Auburn last week and coaches believe he could take a step forward soon because he is no longer focusing on spring football.